By John A. Crespi

Over the past half century or so, Chinese literary studies and film studies have expanded to where those fields have themselves become objects of scholarly research and retrospection. When it comes to Chinese animation, however, so little work has been done that one hesitates to refer to it with the plural “studies.” True, the volume and variety of Chinese animation cannot compare to the vast quantity of material available in literature or cinema. And yet animation has been an element of Chinese mass culture since the 1920s, with the first productions by the Wan brothers, through the official founding of the Shanghai Animation Film Studio (SAFS) in 1957, and on into the post-Mao era. In the twenty-first century, Chinese animation has become higher profile than ever, with massive state and private investment in commercial production, and a lively scene of digitally facilitated animation production ranging from work by globe-hopping avant-garde artists to do-it-yourself home up-loaders. Moreover, with the spread of small-screen mobile technology, animation pervades the everyday lives of people in China just as it does elsewhere around the globe, if not more so. Sean Macdonald’s Animation in China pioneers this nascent field. It is a welcome, overdue exploration of several important moments in the history of animation in China, from the 1930s on into the current century, with particular focus on the seminal and celebrated work generated by the SAFS from the 1950s through 1979. The value of Macdonald’s work lies in how it does not simply narrate the story of Chinese animation. Instead, he offers a self-conscious meditation on Chinese animation as a medium in dynamic, inter-textual tension with global and domestic aesthetics over many decades. More, Macdonald’s analyses never lose sight of the field of politics and power. Here I refer not just to the overt but ever-shifting cultural politics of Mao-era China, but also to the very act of introducing a popular culture, mass media form like animation into the realm of knowledge production historically dominated by the paradigms of area studies and literary criticism. 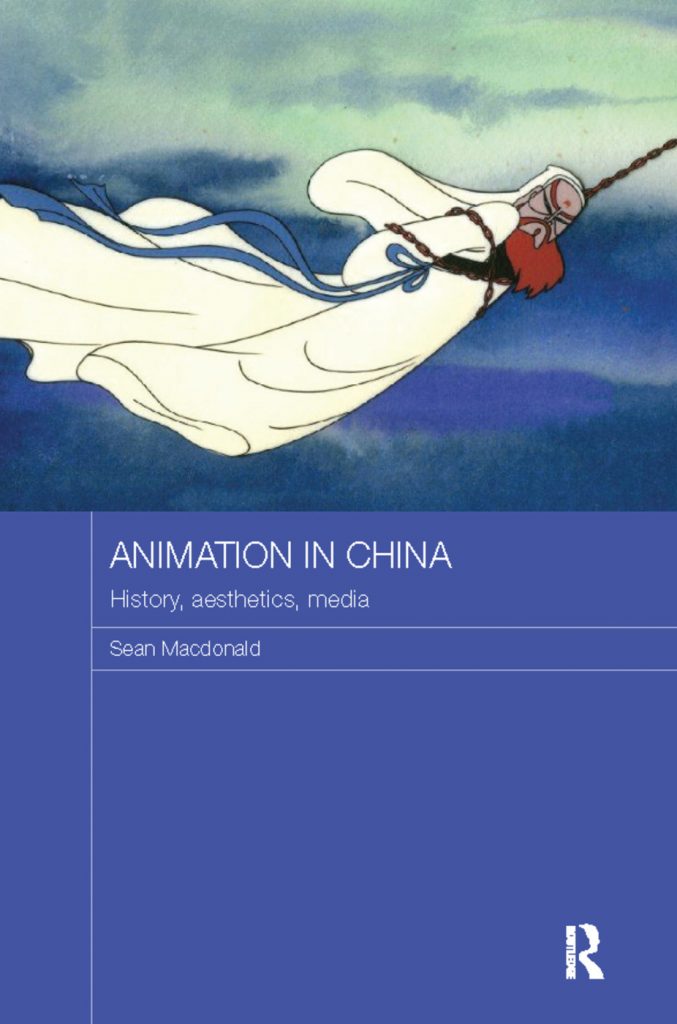 The introduction to Animation in China makes an ambitious proposal: that artistic production during China’s socialist period participated in a post-modern aesthetics normally attributed to capitalist systems of cultural production. Citing Lyotard on institutions and Baudrillard on the simulacrum, Macdonald proposes that the endless repetition of “model” images—from the standardized imagery in Huxian peasant paintings to hyperreal visual aesthetics in the multiply reproduced sculptural ensemble Rent Collection Courtyard—presents a historically simultaneous, socialist counterpart to the simulacra otherwise considered exclusive to capitalist visual aesthetics of commercial mass culture. “The model,” Macdonald asserts, “is the teleology of visual culture within which many classics of SAFS animation were produced,” as well as “the historic context of the animation medium in China” (pp. 13). Chapter one follows through on this theoretical premise. The chapter title, “It All Started with a Monkey,” is a turn on Walt Disney’s famous statement that, “It all started with a mouse.” Monkey, of course, refers to the figure of Sun Wukong, the Monkey King featured in the most famous production by SAFS, Uproar in Heaven (Danao tiangong, 1961; 1964). Macdonald begins the chapter by exploring and analyzing the autobiography of “China’s Walt Disney,” pioneering animator Wan Laiming, and then moves on to a wide-ranging discussion of Wan’s masterpiece, Uproar. After touching on Peking opera versions of Monkey, covering important contemporary commentary on the film, and reviewing the film’s narrative and characters, the chapter revisits the introduction’s theorization of the simulacra. Specifically, Macdonald suggests an analogic relation between the material techniques of cel animation, specifically mass repetition, and the Monkey King’s supernatural ability to produce copies of himself while battling his adversaries—an effect that figures significantly in the film. This theoretical approach offers a welcome alternative to the rather predictable political readings of this film pre-Cultural Revolution work. The main point of the chapter, however, is that the idea of the simulacra, whereby the copy become the original, opens up an alternative, dispersed narrative of Chinese animation beyond a story of national origins.

The next chapter, “Cartoons and Chinese Studies,” begins by stepping back from Chinese animation itself to do the important work of positioning academic research into Chinese mass media, and animation in particular, within the history of area studies. The chapter’s first half takes us from the early days of philology and Sinology on through the World War II-era advocacy for China studies by John K. Fairbank, the late-1970s critique of area studies by Edward Said, and the competing yet strangely kindred conceptions of Chinese literary studies introduced by C. T. Hsia and Rey Chow. In the second half of the chapter, Macdonald relates the formation of area studies to US government sponsored Disney animation in World War II, and to the Wan brothers wartime production of China’s first feature animation, Princess Iron Fan (Tieshan gongzhu, 1941). Chapter three picks up again on the author’s challenge to the standard origin narrative of SAFS. Here Macdonald argues against existing narratives of the studio that identify its art with experiments in “national style” (minzu fengge). Specifically, he demonstrates how conventional explanations of national style—as something marked by “Chinese” aesthetics of guohua, ethnic minority folktale, Peking opera, folklore, and so on—fall prey to oversimplification. For instance, the presumably traditional art of guohua—considered a hallmark of several classics SAFS shorts of the 1950s—is indelibly modern in that its identity as national depends upon a relation of difference with international others. Also, he notes, the material medium of animation problematizes the straightforward adaptation of national painting aesthetics. Thus an animated short might draw upon the style of master guohua artist Qi Baishi, but also requires an aesthetic of “cuteness” to appeal to the target audience of small children.” But, Macdonald observes, “Animals in Qi Baishi never smile” (pp. 100).

The next two chapters provide innovative readings of a pair of classic SAFS productions. Chapter four focuses on the 70-minute SAFS stop-action animation Princess Peacock (Kongque gongzhu, 1963), an adaptation of a Dai minority legend. Macdonald’s reading of Peacock Princess emphasizes how the film falls largely outside the revolutionary discourse of the time due to a narrative structure based on “union-separation-reunion” rather than class conflict. That this story structure aligns Princess Peacock with a history of western “princess” animations, most notably those by Disney, further complicates SAFS claims to national style, Macdonald adds. Chapter five reads the 1979 feature-length animation Nezha Conquers the Dragon King (Nezha naohai) as a “patrilineal parable” whose representation of multiple male lineages speaks to a politically and aesthetically transitional period following the Cultural Revolution. The chapter analyzes the symbolic, narrative, and cinematic elements used to depict the legendary boy-god Nezha’s birth, suicide, and rebirth. Multiple levels of meaning emerge from this close reading, suggesting that the film is much more than a children’s feature. In Macdonald’s view, Nezha Conquers struggles with the Cultural Revolution’s legacy of revolutionary violence and hero worship, issues of political paternity in post-Mao regime change, and even the lineage of “national style” animation as associated with SAFS. In short, while the film can certainly be read as a straightforward political allegory denouncing the Gang of Four (symbolized by four water dragons who function as Nezha’s antagonists), closer examination points toward unresolved tensions at this critical stage of modern Chinese history.

The final chapter offers a wide-ranging, analytical survey of animation production in China, from the 1980s up to the present. This is, as one may guess, quite a tall order for a single book chapter, and the author struggles to craft a narrative that can encompass topics such as the impact of television and overseas programming in the 1980s, the state’s promotion of animation as part of the “culture industry” (wenhua chanye) in the 1990s, and the aggressive investment in domestic animation in the 2000s, not to mention the profound effect of the internet and digital media, as well as various experiments in animation by the artistic avant-garde. What the reader might take away from this discussion is the enormous potential of Chinese animation studies for those intrepid enough to begin sorting through what has become a thoroughly pervasive and mutable form.

As the first book of its kind, Animation in China merits attention from scholars interested in Chinese and global mass media, and from anyone who would like a hint of a new and significant pathway along which China-related cultural studies may be headed in the near future. It must be said, too, that there are places in the book that challenge the reader due to a need for stronger continuity of argumentation both within and among chapters. On the whole, however, Animation in China will become an important point of reference for what ought to become a very plural field of animation studies in years to come.

John A. Crespi is the Henry R. Luce Associate Professor of Chinese in the Department of East Asian Languages and Literatures at Colgate University in Hamilton, New York. His research interests include performance and voice in modern and contemporary Chinese poetry, and more recently, the relationship between Chinese cartooning (manhua) and pictorial satire magazines during China’s Republican and early-socialist periods. Among his major publications are Voices in Revolution: Poetry and the Auditory Imagination in Modern China and “China’s Modern Sketch,” a three-part, on-line illustrated essay for MIT’s Visualizing Cultures project.