The extraordinary commercial success of recent Chinese animated films such as Monkey King: Hero is Back (2015), White Snake (2019), and Nezha: Birth of the Demon Child (2019) has rekindled the domestic Chinese audience’s interest in Chinese animation, and has also attracted considerable attention from both popular media and academia. However, these animations have also been criticized for their assemblages of visual motifs copied from video games and Japanese and American animations, and thus their lack of originality and mediocre artistry. Although they utilize figures and stories from popular Chinese folklores, once adapted by highly regarded animations in the 1960s-1980s (for instance, the Monkey King in Uproar in Heaven [1961-64] and Nezha in Nezha Makes Havoc in the Sea [1979]), there seems to be a historical rupture in terms of values and aesthetics between contemporary Chinese animations and works created during the “golden age” of the high socialist period (roughly 1950s-1980s) under the auspices of the state-owned Shanghai Animation Film Studio and its mode of collective production. While people are enjoying a possible rejuvenation of Chinese animation today, little is known about the animation classics made by the Shanghai Animation Film Studio during the socialist decades. Daisy Yan Du’s brilliant book, Animated Encounters: Transnational Movements of Chinese Animation, 1940s-1970s (2019), bridges this gap from an illuminating transcultural and transnational perspective. 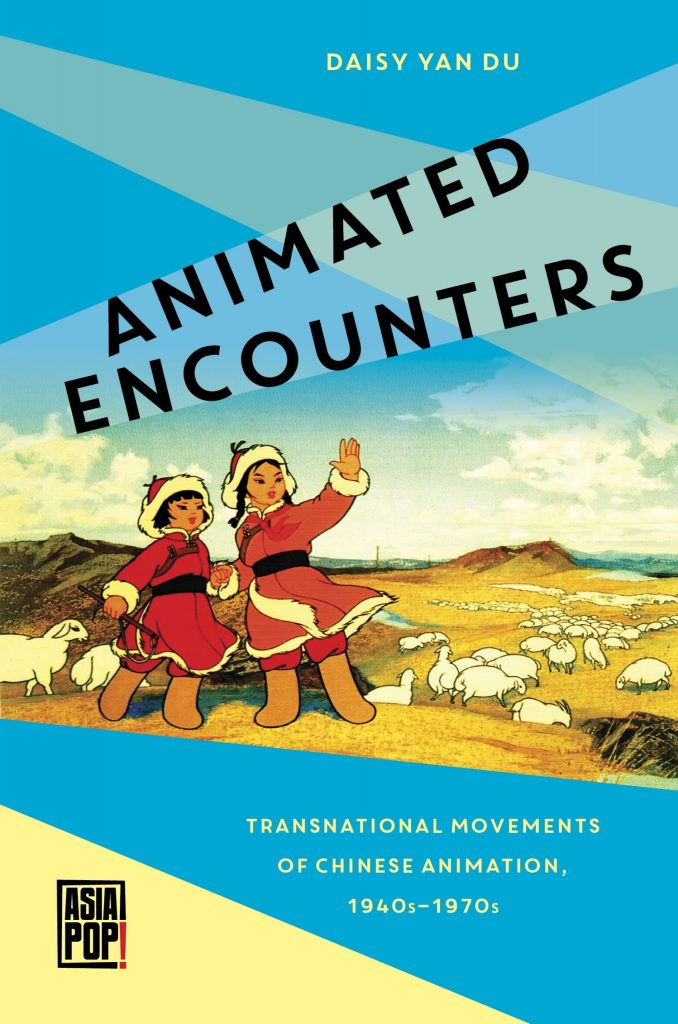 In comparison to live-action cinema, Chinese animation has scarcely been studied: the only three monographs on the subject in English are Rolf Giesen’s Chinese Animation: A History and Filmography 1922-2012 (2014), Sean Macdonald’s Animation in China: History, Aesthetics, Media (2016), and Weihua Wu’s Chinese Animation, Creative Industries, and Digital Culture (2017). Daisy Yan Du’s Animated Encounters enriches and solidifies this field in a historically and geopolitically expansive and fluid way, creating a dialogue among Chinese, Japanese, Soviet and American animations from the 1940s to the 1970s. In the introduction, Du proposes a layered conceptual framework. Firstly, inspired by postcolonial and children’s studies, Du points out the “double marginality” of animation and its target audience—children as social subjects— and suggests animation’s potential for “double subversiveness and even double power” (pp. 11) in negotiating political doctrines. Secondly, Du critiques the institutionalized discourse of “national style” that guided animated filmmaking and intellectual debates in the 1950s and 1960s, offering a commentary on its rigid, exclusive, essentialist, and even xenophobic character (pp. 14-17). However, Du also points out that in the context of animation and under the rubric of “plasmaticness/plasmaticity” (inspired by Sergei Eisenstein and Thomas Lamarre), “national style” can be evolving, inclusive and plural, both in terms of animation’s medium specificity and its capability to facilitate multilayered dynamic encounters and destabilize the conventional center-periphery dichotomy. In Du’s perspective, the ceaseless movement of animation histories across geopolitical borders does not necessarily follow the hegemonic mode of modernity; instead, these histories “flow in multiple directions with unexpected turns, detours, and entanglements” (pp. 21). Hence, Animated Encounters moves beyond the reified national style approach to Chinese animation, invigorating the currents of film between the polarities of national and transnational.

Besides the introduction and epilogue, Animated Encounters is composed of four chronologically organized chapters. Chapter one, entitled “An Animated Wartime Encounter: Princess Iron Fan and the Chinese Connection in Early Japanese Animation,” demonstrates how Chinese animation has been appropriated by other national cultures (in this case, Japanese) and how the transnational journeys of the first Asian feature animation Princess Iron Fan (Wan Laiming and Wan Guchan, Shanghai, 1941) complicate our understanding of national identity during WWII and beyond. This chapter employs Thomas Lamarre’s concept of “wartime speciesism,” a displacement of race and racism onto relations between humans and animals (pp. 41), to discuss how animal images are used to denigrate wartime enemies in Chinese, Japanese, and American cartoons and animated films. The chapter also adds a gendered perspective to the masculine discourses of “wartime speciesism” and nationalism. Du’s engagement with the anti-Japanese and resistance-mobilizing messages embedded in Princess Iron Fan, the film’s popularity in Japan at a moment when the Japanese army was invading and occupying most of China, as well as the Japanese audiences’ selective readings of the film is highly suggestive and complex. The film’s impact in Japan, Du shows, far exceeds wartime and foreshadows further transcultural connections in animations created in the following decades. For instance, the prominent and prolific Japanese animator Tezuka Osamu (1928-89) acknowledges that Princess Iron Fan inspired his manga and animated films, such as the serialized manga My Sun Wukong (1953-1961) and Astro Boy (1963), the latter of which in turn proved to be exceptionally popular in 1980s China.

The second chapter, “Mochinaga Tadahito and Animated Filmmaking in Early Socialist China,” temporally overlaps with and follows the timeline of WWII, yet makes spatial observations from an oppositional direction: from the outside (Japan) into China. It discusses the Japanese animator Mochinaga Tadahito’s (1919-99) vital role in creating animated films and contributing to the animation film industry in China at its nascent stage from the late 1940s to the early 1950s. Thus, the chapter emphasizes the indispensable role of transnational flows of culture in the formation of Chinese animation and “challenges the national essence and Chineseness argument prominent in national style discourse” (pp. 25). Working at the Japanese studio Man’ei (Manchukuo Film Association) in Manchuria, Mochinaga stayed in China after Japanese surrender in 1945 and made popular animations for the Northeast Film Studio and later the Shanghai Film Studio. Mochinaga worked closely with his Chinese colleagues to make “political satire” animation shorts during the civil war, such as Dreaming to Be Emperor (1947) and Capturing the Turtle in the Jar (1948), which target adults (especially People’s Liberation Army soldiers and peasants) and lampoon the nationalist leader Chiang Kai-shek and his collaboration with the U.S. army and politicians. As Du makes clear, Mochinaga’s cel-animated films Thank You Kitty (1950) and Kitty Goes Fishing (1952) carry the visual motifs of the Japanese wartime propagandist animations he participated in creating while also circulating didactic messages among a new audience: Chinese children in the early 1950s. Mochinaga’s association with transnational leftism, seen in this light, demonstrates the force of his political commitments and the significant internationalist dimension in his work, even amid wartime imperialism and antagonism in Sino-Japanese relations.

Chapter three, “Inter/National Style and National Identity: Ink-Painting Animation in the Early 1960s,” provides a comprehensive analysis of the rise of national style in Chinese animation situated in the context of Sino-Soviet relationships during the Cold War in the late 1950s. Additionally, it offers an elaborate discussion of ink-painting animation in the early 1960s as a prime example of national style. Du employs the term “inter/national” to signify the mutual imbrication of the “national” and “international,” demonstrating that “national style and national identity are not fixed or timeless concepts, but instead are fluid, shifting, and historically contingent” (pp. 137). On the one hand, the chapter argues that the socialist state’s institutional and financial support made the time-consuming, labor-intensive and costly production of ink-painting animated films possible, enabling the masterful artistry of such works; on the other, it explores “how traditional art traveled from the past and was appropriated for nationalist agendas in the socialist present” (pp. 25). Using the prominent ink-painting animations Little Tadpoles Look for Mama (1960) and The Herd Boy’s Flute (1963) as examples, Du insightfully theorizes Chinese ink-painting animation as producing an “aesthetic of absence” (pp. 131). By tracing the genre’s long history of visual and artistic conventions with references to the renowned ink painting artists Qi Baishi and Li Keran, Du highlights the transmedial connections between the two art and media forms of animation and painting.

Chapter four, “Animals, Ethnic Minorities, and Villains in Animated Film during the Cultural Revolution,” explores the disappearance of anthropomorphic animals from animated films made during the Cultural Revolution. In particular, it examines the interactions and tensions between these animations and the official discourses of “revolutionary realism” and “model opera/live-action films.” In Du’s view, “animals play a central role in defining animation as characterized by plasmaticity, movement, and fantasy” (pp. 177); with the disappearance of animals and fantastic folktales and legends popular before the Cultural Revolution, these animations “lost [their] medium-specificity (plasmaticness and fantasy) and became more like realist live-action films” (pp. 178). In complement to the transnational and inter/national connections in Chinese animation discussed in previous chapters, this chapter focuses on the role of internal border-crossing movements in relation to ethnic minority characters featured in crucial animations such as Heroic Little Sisters of the Grassland (1965) and The Golden Wild Goose (1976)—films that both resituated ethnic minority traditions, myths and legends in the revolutionary context and depicted cultural homogeneity during the Cultural Revolution (pp. 164). Circling back to the notion of “wartime speciesism” discussed in chapter one, Du proposes that speciesism functioned differently when anthropomorphic animals were absent from animated films during the Cultural Revolution, through what she calls a “disembodied or invisible speciesism” instead (pp. 168).

With its timely transcultural perspective and thorough historical research and theoretical framework, Animated Encounters sheds new light on the study of Chinese animation. It merits attention from scholars interested in animation studies, as well as from those in Chinese and global cultural and media studies. In its epilogue, the book demonstrates its relevance to the contemporary plight of the Chinese animation film industry. In fact, it challenges this industry and the scholarship around it to confront the era of digital media and points to potential directions for future research, for instance the study of animation soundscape and audiovisual interaction, as well as of gender politics.

Certain discussions such as the Chinese animators’ fascination with “national style” (or “national characters”) could perhaps be situated in a longer historical range (1930s onwards) and engage with intellectual debates in a larger literature and arts context.[1] Material techniques and political-aesthetic potentials within the “medium specificity” of Chinese animations—for instance, stylistic and production difference in cel, puppet, paper-cutting, paper-folding and ink-painting animations—could also be more closely examined. These understudied areas do not prevent Animated Encounters from making a pivotal contribution to or becoming a significant reference for Chinese and global animation studies.

Ling Zhang is an Assistant Professor of Cinema Studies at SUNY Purchase College. She holds an ACLS post-doc fellowship for the academic year of 2019-2020, while completing her book manuscript, Sounding Screen Ambiance: Acoustic Culture and Transmediality in 1920s-1940s Chinese Cinema. She received her PhD from the Department of Cinema and Media Studies at the University of Chicago and specializes in film sound, Chinese-language cinema and opera, documentary, as well as film and urbanism. Zhang has published in The Global Road Movie: Alternative Journeys (2018), Early Film Culture in Hong Kong, Taiwan and Republican China (2018), Journal of Chinese Cinemas, Film Quarterly, CLCWeb: Comparative Literature and Culture, Asian Cinema, The New Zealand Journal of Asian Studies, among others.