Animation renders visible the nonhuman energy that is otherwise hidden. The visualization of this nonhuman affective energy is exemplified by the animated feature film Ne Zha (2019), which reaches its climax during the fight of fire vs. water between Ne Zha and Ao Bing. As Ne Zha was born with the power of the demonic while Ao Bing inherited the power of the divine, the two former friends must turn against each other because of their cursed fates. In this scene, Ao Bing, a dragon deity who controls the rainfall in Chinese mythology, summons water to flood the Chentang Pass; to save the villagers, Ne Zha casts fire to repel the floodwaters (Fig. 1). Amid apocalyptic flames, floods, and lightning, the powers of Ne Zha and Ao Bing are finally merged into one to collectively fight against their fates of being struck by the lightning bolts of heaven.

Ne Zha and Ao Bing’s magical abilities to manipulate fire and water reveal a fantastic imagination of how human bodies and the environment interact and exert effects on each other. One form of this human-environment interaction is, as evidenced by Ne Zha, controlling natural elements. In John Durham Peters’ and Yuriko Furuhata’s discussions of elemental media, they show that cultural techniques of controlling the environment can be understood through a consideration of natural elements as a medium.[1] While Peters draws on the Greek philosophical tradition of classical elements (water, fire, sky, earth, and ether) to consider the relationship between media and environment, Furuhata expands this framework by calling attention to geopolitics and taking into account the Chinese philosophy of five basic elements (metal, wood, water, fire, and earth). She refersto fengshui or geomantic practice in the example of the architectural dragon holes in Hong Kong’s high-rise buildings as “enchanted techniques” that operate as “ritualized forms of weather control.”[2]Compared to geomantic practice, animations like Ne Zha dramatize another enchanted technique by making palpable the otherwise imperceptible natural and supernatural forces with the help of film technologies, visual effects (VFX) in particular.

In the history of Chinese animation, there is a lineage of animating magical techniques that control natural elements to exert forces and effects. In China’s earliest animated feature film, Princess Iron Fan (1941), the magical banana-leaf fan owned by the Princess is powerful enough to create howling winds to extinguish the inferno on the flaming mountains, which obstructs the pilgrimage of the Buddhist monk Tang Sanzang and his three disciples. The entire story of Princess Iron Fan is organized around the fan’s magical ability to generate exceedingly strong winds. In the beginning, Princess Iron Fan refuses to lend the fan to Monkey King to put out the flames. She waves the fan, creating whirlwinds that blow away all the three disciples (Fig. 2). The 1961 animated film Havoc in Heaven features clouds to represent the heavenly palace. In this film, clouds become not only a vehicle to fly bodies through the sky but also the essential element of the celestial world that helps to produce an ethereal ambience (Fig. 3). 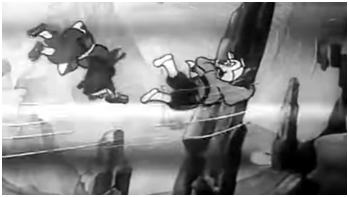 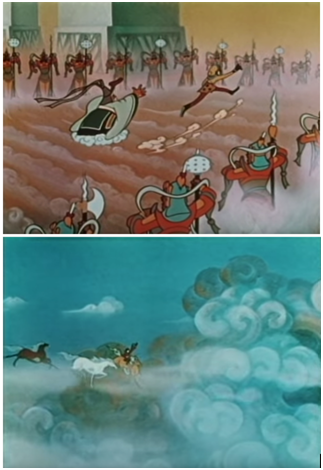 Locating Ne Zha in the genealogical history of how early Chinese animation renders visible the interaction among characters’ bodies and natural elements does not mean that we should ignore its material and technological conditions. A major difference in media textures emerges if we compare the 2019 Ne Zha to the animated film Prince Nezha’s Triumph Against Dragon King (1979), produced by the Shanghai Animation Film Studio. Despite their similar stories, as both are based on Ne Zha’s story in the Chinese classic The Investiture of the Gods (Fengshen yanyi), the texture of Prince Nezha is much closer to that of Havoc in Heaven—one that is associated with hand-drawn illustration and celluloid animation techniques. In contrast, the 2019 Ne Zha, produced using software such as Autodesk Maya, Adobe and Nuke, presentsa CG-rendered photorealistic texture that has gained prominence in China roughly after the boxoffice success of the animated film Monkey King: Hero Is Back in 2015.

The CG animation style is related to a particular mode of film production that relies on big budgets, labor-intensive work, and cooperation among dozens of animation and film companies. Ne Zha was produced by Enlight Media, one of China’s largest media groups based in Beijing. In 2015, Enlight Media established its animation subsidiary Coloroom Pictures in hopes that it will become China’s version of Pixar Animation Studios.[3]Immediately after the release of Monkey King in the same year, Enlight Media reached out for collaboration with the Monkey King team October Media and has since invested millions in this studio, along with its investments in more than twenty other ACG-related companies in China.[4]Both Coloroom Pictures and October Media major parts in the making of Ne Zha. In total, more than 70 companies were involved in its production.[5]Following Monkey King’s box-office success, Ne Zha has become another smash hit in China and has earned more than US$728 million worldwide ($723 million in China).

In Ne Zha, something similar to Monkey King happens. The protagonists’ bodies are initially controlled by seals to suppress their supernatural power. With the shared theme of “I am the master of my own fate,” both Ne Zha and Monkey break their seals and transform themselves into the body of a superhero to defeat the enemy. In both films, the process of the body transformation is accompanied by blasting flames and powerful background music, evoking intense feelings among the audiences that connects the reality of the audiences and the enchanted reality of animation (Fig. 4). It is fire, as Bao Weihong points out in her discussion of the cinema as an affective medium, that “gives shape and tangibility to what seems an amorphous, imponderable, yet overpowering and all-encompassing medium.”[6] Fire renders visible an apparatus of affects, film technologies, institutional controls, and politics in its “plasticity, animation, vitality, its destructive and creative force.”[7]

The making palpable of natural elements such as fire and water in Ne Zha and Monkey King is facilitated by VFX technologies, which take up an increasingly important role in digital animation production. Around 17 Chinese VFX companies participated in the production of visual effects for Ne Zha.[8] While creating visual effects before the digital turn of film technologies mostly relied on practical on-set special effects, computer-generated imagery (CGI) and other digital techniques have become essential in generating moving images of natural and supernatural phenomena. In Stefan Helmreich’s study of the representation of ocean waves in animation as well as live-action cinema, he shows the relationship between the “elemental power of cosmic, inhuman, arbitrary forces” and visual effects.[9] Indeed, when Ao Bing casts the water spell to summon floods, VFX techniques are used to present the gravity-defying movements of water. Coming from rivers and lakes on earth, flowing streams ascend and converge into a huge body of water hanging in the sky over Chentang Pass (Fig. 5). Helmreich argues that the simulation of a gargantuan body of water has made the wave a “narrative force” and that “the wave itself becomes a character.”[10]In other words, natural elements, which are often put in the background environment, have assumed the status of the human individual in the age of digital cinema.

However, Ne Zha affords another way to understand the relationship between the human (or human-shaped) characters and natural forces. Ne Zha and Ao Bing are not simply controlling, or mediating, fire and water; fire and water are constitutive of them. When Ne Zha was born, his whole body was engulfed by fire as if the fire is part of him. It is indeed fire that defines Ne Zha—the fire-tipped spear is his weapon and the flaming chariot his flying vehicle. The same can be said about Ao Bing, who was born in the deep ocean and wears a magical armor made out of scales. Ne Zha assembles human bodies (Ne Zha and Ao Bing), technical objects (spear, chariot, and armor), and elemental forces (fire and water) in such a way that the human is not the controller of the natural force. Instead, the human is only formed through their creative, playful, and sometimes disastrous and fatal interactions with fire and water. Ne Zha invites an understanding of the nonhuman environment as being always immanent to the formation of human subjectivity. Visual effects and their rendering of nature hence offer an opportunity for us to critically reflect on the relationship between non-verbal effects and language (narrative), and between human (or human-shaped) characters and the nonhuman background.

Seen from this perspective, the formal aspects of Ne Zha complicate the story’s theme of achieving self-determination and taking control of one’s own destiny even at the risk of going against the will of heaven. This theme runs from Monkey King, through Big Fish & Begonia (2016), another important animation produced by Enlight Media, to Ne Zha. The emphasis on self-determination in these animated films parallels Chinese media groups’ desire for the rise of national animation (guoman) in the global market, especially if we consider how these animated films draw on classic Chinese tales and market their national aesthetics as a unique selling point. However, as Furuhata’s discussion of the Eastern philosophy of elements shows, these enchanted techniques of the East are “already a part of the complicated genealogy of Western media, including computation and cybernetics.”[11]The use of VFX techniques in these Chinese animations is also part of global media production. If we extend Ne Zha’s narrative of achieving the self-determination of a human individual to that of a national individual, the relationship between Ne Zha and fire nonetheless requires a conceptualization of the Chinese nation-state, not as an already individuated subject, but as being situated within its environment—an interrelated global assemblage of technologies, capital, media infrastructures, institutions, humans and animals, as well as ideas and imaginations.

[3] Since 2015, Coloroom Pictures has participated in the production of many significant Chinese animated films, including Big Fish & Begonia (2016), The Guardian (2017), Have a Nice Day (2017) and Boonie Bears: The Big Shrink (2018). Besides, Coloroom also distributes Japanese animation in China, among them Shinkai Makoto’s Weathering with You (‎2019) and Your Name (‎2016) as well as the influential Ghibli animation Spirited Away (2001).

Hang WU is a PhD candidate in East Asian Studies at McGill University, Canada. She is currently completing her dissertation, which investigates the technique of visual effects in relation to animation and the nonhuman in Chinese cinema and media from the Cold War era to the contemporary. Her articles have appeared in Animation: An Interdisciplinary Journal and Contemporary Cinema (Dangdaidianying).