A world acclaimed author and researcher, Rolf Giesen presents the Western audience with the first history of Chinese animation ever written in the globalized English language. He chooses a linear narrative, chronologically structured in decades (the 1920s, the 1930s, and so on), and for each decade he provides the list of the relevant films produced, with plenty of historical information and critical comments. A simple, traditional approach; however, any unbeaten – and more intellectually exciting – track would have been confusing and pretentious, in a world that knows little or nothing at all about the subject. 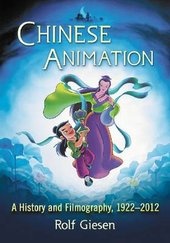 The development of Chinese animation, no less than the development of live-action cinema, was – and is – strictly intertwined with the development of Chinese politics. First of all because since the 1950s the production was basically aimed at propaganda or at a subtler, allegoric indoctrination. Second, because the Shanghai Animation Film Studio, the only animation studio of socialist China (1949-1976) based in Shanghai, was property of the State. Third, because of a special enlightenment of the Chinese ruling class. It sounds shocking (to the westerners) that the almighty Zhou Enlai, the eternal Number Two to the great helmsman Mao Zedong, bend over to our humble art, declaring that “Animation films are rather outstanding, with their special and unique style, in the Chinese film industry” (pp. 5).

After the great international success of the animated shorts Xiao kedou zhao mama (Little Tadpoles Look for Mama, 1960) and Mudi (The Herd Boy’s Flute, 1963), and of the feature film in two parts Danao tiangong (Uproar in Heaven, 1961-1964), the Cultural Revolution ravaged the country, and the Shanghai Animation Film Studio remained inactive from 1965 to 1973. The 1970s were the aftermath of the Cultural Revolution, and the following decade saw reform, a transitional stage and eventually the decline. Shanshui qing (Feelings of Mountains and Rivers, 1988) was internationally awarded and acclaimed, but it was the swan’s song. The studio’s monopoly ended, American and Japanese TV series and theatrical films were imported, and the characteristically Chinese style and technique of ink-painting animation was abandoned and forgotten.

“Throughout the 1990s,” writes Rolf Giesen, “the Chinese government modified the animation industry in a number of ways to bring it from a planned to a market economy (… But) afraid that foreign shows might have negative impacts on children’s values and on the creation of a national identity, the Chinese government clamped down in 2005-2006, limiting the number of foreign cartoons on television to 40 percent” (pp. 81-82).

Rolf Giesen closes his book with an “Afterword” full of information, but on the future of animation in the People’s Republic of China he had written the most intense words on page 7: “Creativity training is (now) high on the Chinese agenda (…) creativity cannot be indoctrinated but only experienced (…) one cannot create new things if one is not a creative individual.” Apparently China’s current ruling class, starting with the President of the Republic Mr. Xi Jinping, are aware of this and are doing their best to foster and promote creativity instead of commonplace in the young generations. This optimistic note closes the reading of a book of great importance, which redresses a shortcoming, and does so with sensitivity and preciseness. Chinese Animation is an important book for every English-reading person, as it deals with the current animation culture of more than a billion and a half inhabitants of our common planet.

Giannalberto Bendazzi is an Italian film critic and historian, who taught at the Università degli Studi of Milan and at the Nanyang Technological University of Singapore. His 2016 book Animation – A World History is a complete remake of his previous classic Cartoons, published in many languages. In 2001, he edited Alexeieff, Itinéraire d’un maître – Itinerary of a Master, dedicated to one of the great creators of avant-garde cinema. The book on Quirino Cristiani, the author of the first animated feature films, was published in Spanish by Ediciones de la Flor, Buenos Aires. He is an advocate of animation as an art form better than a children’s toy. A founding member of the Society for Animation Studies, and for nine years a member of the Board of Directors of ASIFA, Giannalberto Bendazzi wrote books on live-action cinema, too: on Woody Allen and Mel Brooks.