My heartiest congratulations to Professor Daisy Yan Du for the founding of the Association for Chinese Animation Studies (ACAS) in Hong Kong. In the West, the Society for Animation Studies (SAS) was first founded in 1987. In Japan, the Japan Society for Animation Studies (JSAS) was founded in 1998. South Korea has also established its own research societies and organizations promoting Korean animation. What is laudable is that as its website description shows, ACAS is meant to be a “leading scholarly and public organization dedicated to introducing and promoting Chinese animation to the English-speaking world.”

Indeed, the spirit is one of broadmindedness allowing scholars around the world to research and promote Chinese animation in English. Moreover, the site of the organization is in Hong Kong – a perfect place where the East and West often meet and thought-provoking meaningful dialogues can be made and advanced.

The founding of ACAS also brings back memories of my pioneer work in researching the historical and contemporary animation scene of Hong Kong in the late 1990s. It resulted in a published article “The Art Movement between Frames in Hong Kong Animation” in Animation in Asia and the Pacific, edited by John A. Lent (Eastleigh: John Libbey Publishing, 2001). As mentioned in my article, the animation medium had held a marginal status in Hong Kong film industry then. Therefore, it was difficult for me to begin the initial legwork of researching and making contacts.

Fortunately, the Hong Kong Film Archive was very helpful and committed in sharing my passion in documenting past Hong Kong animation in English. Then at a seminar talk on anime at the Broadway Cinematheque in Kowloon Yau Ma Tei, a place where many imported Japanese animation films were shown, a chance encounter with a fellow Hong Kong animator, Yu Man Fai who enabled me to connect with the animation-making community in the territory. Later I got the opportunity to interview Huang Yu (Fig 1), who was the director of the puppet animation film, Princess Hibiscus (1957). I discussed him and the film in my article “The Art Movement between Frames in Hong Kong Animation.” He was also a well-known live action film director during his time. 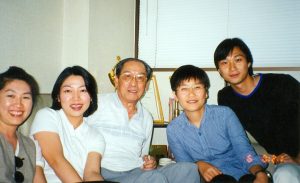 The interviews led me to meet animation-master teachers like Vietnamese Chinese Wu Keung (Fig 2) who was a key teaching staff at Beijing Film Academy, among his award-winning animation included the Bell on a Deer (1982). Wu Keung was humble and grandfatherly-like throughout the interview meeting; I learned that he later settled down in Hong Kong and upon my enquiry, he nonchalantly told me his ex-colleagues in China were the Wan Brothers, Te Wei and so on. Apparently, there were no “airs” among them whether who was a better animator or not, as everyone was an artist and the goal was to complete each animation project successfully working as a team. 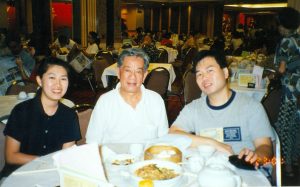 Another exciting interview was with the Indonesian-born Eurasian John Z. Sinawri who had worked with John Halas and Paul Williams in Britain before settling down in Hong Kong. John Z. Sinawri was well-versed in British and Western animation in general as he lived in Britain for a while. These were some of my fond reminiscences of my research work on Hong Kong animation. Till today, I am appreciative of such rare meetings including other pioneer Hong Kong animators whom I was introduced to. Kudos to animator Yu Man Fai (Fig 2) for his assistance and he was actually one of the first animation staff producing the Mcmug television series then.

My view is that personal networking is crucial for primary research efforts but having a solid resource center dedicated to the promotion of subject matter helps tremendously and this is especially so when the subject of Chinese animation research is relatively new and requires much nurturing and support.

May the center grow in strength supporting animation studies scholars worldwide interested in the subject of Chinese animation and its multi-disciplinary background, functions and influences. Foregrounding the English language as a tool of communicating and connecting is important as it does not present a Sino-centric position of the research center. In fact, Western scholars have contributed and pioneered significant research writings on Chinese animation in English. While doing animation research in Japan, I also came across prominent Japanese texts on Chinese animation, for which I had accented their status in my publications.

Hence, for those of us who are bilingual or trilingual and so on (with knowledge of Mandarin, Korean, Japanese, Cantonese, Malay or French etc.), we shall continue to play a pivotal role in highlighting and making available information about Chinese animation in English. I am glad that the center is not created for only Chinese-speakers interested in Chinese animation but rather, for all international, enthusiastic and passionate scholars and supporters interested in that subject. For animation studies in general, it is another milestone of development and progress.

Tze-yue G. Hu, PhD, is an independent scholar and author based in Northern California, USA. Her book publications include: Frames of Anime: Culture and Image-Building (University of Hong Kong Press, 2010), Japanese Animation: East Asian Perspectives (Co-Editor, University Press of Mississippi, 2013), and Animating the Spirited: Journeys and Transformations (Upcoming). One of her journal articles, entitled “The Animated Resurrection of the Legend of the White Snake in Japan,” appeared in Animation: An Interdisciplinary Journal 2:1 (2007).