In April 2017, I worked as a student assistant for the Animators’ Roundtable Forum held at the Hong Kong University of Science and Technology and had the valuable opportunity to get to know the renowned animators involved. Mochinaga Noriko, daughter of Mochinaga Tadahito, shared with me some old photos taken and developed in the 1950s. One of them was a group photo of the animators working in the Animation Group (Meishupian zu) at the Northeast Film Studio (Dongbei dianying zhipianchang) in the city of Changchun (Figure 1). The Animation Group was later transformed into the Shanghai Animation Film Studio (Shanghai meishu dianying zhipianchang) in 1957. Right before their relocation from Changchun to Shanghai in 1950, almost all the animators who worked for the Animation Group at the Northeast Film Studio took the photo together. Mochinaga Tadahito was one of them (third from right in the first row), together with his close colleague Te Wei (third from left), who later became the president of the Shanghai Animation Film Studio (tenure: 1957-1984). The man sitting between them is Wu Yinxian (1900-1994), then president of the Northeast Film Studio. Duan Xiaoxuan, the first animation camerawoman in socialist China, is the first from left in the second row. The little girl standing on the first row is Mochinaga Noriko. 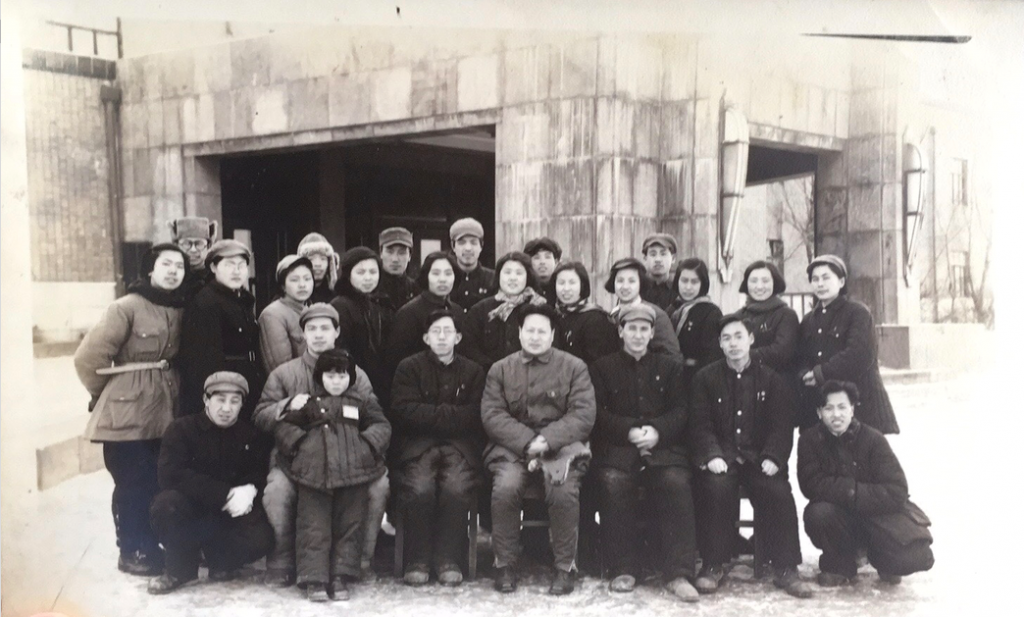 Figure 1: The Animation Group at the Northeast Film Studio, 1950.

This photo is especially fascinating for me not only because it captures the pioneers of Chinese animation, but also because of what has been written and stamped on the back of the photo: the name of the photo owner and the stamp of the Animation Group (Figure 2). As the handwriting shows, this photo belonged to “Comrade Li Guang,” wife of Mochinaga Tadahito and mother of Noriko. Li Guang was the Chinese name for this Japanese woman, who also worked in the Animation Group. Her name was given by Chen Bo’er, who was a well-known leftist filmmaker and a leader of the Northeast Film Studio at that time. She also gave Mochinaga Tadahito the Chinese name “Fang Ming.” Putting together the couple’s Chinese names generates a phrase, “Guang Ming,” which means bright and luminous. Chen Bo’er gave the couple these names with the hope that the future of Chinese animation would be very bright. 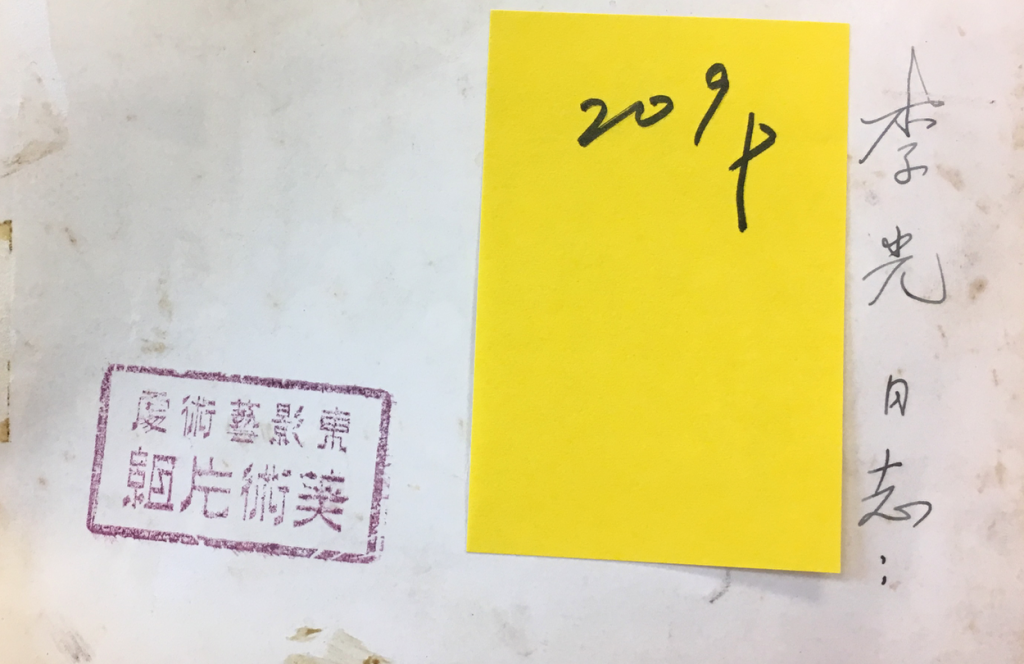 Many of the Chinese animators who participated in this roundtable forum had worked with Mochinaga Tadahito in Shanghai in the early 1950s, but Duan Xiaoxuan, the first animation camerawoman in socialist China, was the only Chinese animator at the forum who had worked with Mochinaga Tadahito at the Northeast Film Studio in the late 1940s. Duan and the Mochinaga family, although one in China and the other in Japan, kept a lifelong friendship for more than half a century. When Duan Xiaoxuan and Mochinaga Noriko first saw each other at the hotel on campus, they immediately recognized each other and hugged. Noriko affectionately called her “Auntie Duan” (Duan Ayi). After several leg surgeries, Duan was unable to walk as freely as younger participants, and Mochinaga Noriko volunteered to assist Duan with walking. I mention this detail because I feel that this roundtable forum was a rare opportunity to gather all of these influential animators together, as most of them are in their seventies or eighties and have some health problems. Dai Tielang, the 87-year-old senior animator who directed the well-known TV animation series Police Chief Black Cat (Heimao jingzhang, 1984-1987), was very enthusiastic about participating in the forum (he worked in Hong Kong in the late 1940s and really wanted to revisit the place) but had to cancel his trip at the last minute due to his suddenly worsened medical conditions. The forum was not just a serious workshop on artistic creation, but also a rare opportunity for these animators, who had worked closely as colleagues and friends for several decades, to reconnect with each other and talk about the old days. Almost all of them experienced the peak of their animation careers during the socialist decades.

At the conference, I kept wondering what the Shanghai Animation Film Studio, its animated films, and the collective memory of socialist animated filmmaking really mean to us at this particular historical moment in 2017. During the two-day run of the forum, I was not surprised by the animators’ emphasis on the high artistic quality of the films made by the Shanghai Animation Film Studio, especially those that drew on traditional Chinese fine arts (meishu) aesthetics and traditions, such as ink-painting and papercutting animation. These animators highlighted the terminological difference between fine arts film (meishu dianying) and moving pictures (donghua), maintaining that the animated films produced by the Shanghai Animation Film Studio are works of art, and they are artists first and foremost. This self-positioning has been very important for me to recognize the genealogy of where they come from, a genealogy that combines animation as a medium and as artwork. This may be the reason the studio’s animated films usually had an origin in art, and why they are usually reminiscent of traditional Chinese landscape paintings, illustrative books, and puppet theatrical performances.

From their talks, I noticed that there is a tension between the position of animation as an international technological medium and animation as a culturally specific artwork of China. This tension was key to many animators’ discussions, which more or less geared towards an ethnoculturalistic view of animation. For instance, Duan Xiaoxuan’s talk on the invention of ink-painting animation in the early 1960s, Pu Jiaxiang’s emphasis on the national style, and his son Pu Yong’s talk about how animators made innovations to produce papercutting animation were indicative of such a tendency. Jin Fuzai’s talk on musical composition in animation, which I found quite impressive, also exemplified how these animators grasped the apparatus of animation by locating it as something culturally specific. In his talk, Jin recalled his experience of composing the background music for Three Monks (Sange heshang, 1980) and Nezha Conquers the Dragon King (Nezha naohai, 1979) with traditional Chinese instruments. In particular, he described how he used traditional Chinese instruments of various pitches, such as banhu, erhu, and suona, to create different tonal qualities for different characters in Three Monks. Nezha’s death scene was an example of successful background music use. When Nezha commits suicide in the film, most spectators were touched by the sudden silence—an acoustic technique of suspending all music and sound, which is related to the aesthetic of liubai (leaving blank space) in traditional Chinese painting. Jin was inspired by the aesthetics of traditional Chinese paintings and deliberately adopted this technique in his musical composition.

Aside from the historical narratives about animation that hinge on the logic of the Chinese socialist state and its drive for a history of alterity, Chang Guangxi’s talk introduced new turns to the national history of Chinese animation. After the economic reform in the late 1970s, the Shanghai Animation Film Studio underwent gradual transitions from a state-owned studio, which was directly controlled and financially supported by the state, to a self-financing entity. Chang detailed the filmmaking process of Lotus Lantern (Baolian deng, 1999) from the point of view of directing it and showed us how animators strove to produce commercially lucrative works. Lotus Lantern was a successful experiment for the Shanghai Animation Film Studio to accommodate itself to the new logic of the market. To make it a profitable work, their team cooperated with Sony Corporation to produce the theme song for this animation by inviting popular singers from Taiwan. Although Lotus Lantern was a huge box-office hit—and one of my favorites when I was young—I somehow felt that Chang did not find it as satisfying as I did.

One audience member of this forum asked me, “Don’t you feel that Lotus Lantern is influenced by Disney animation? Ga Mei (the female protagonist) looks just like Pocahontas.” This made me think that perhaps Chang had to make some compromises in order to cater to the market. Before the making of Lotus Lantern, Chang participated in the production of animated films in the socialist period and completed masterpieces such as Uproar in Heaven (Danao tiangong, 1964) and Nezha Conquers the Dragon King. The transformation of the mode of animation production around the 1980s had a huge impact on these animators. They had to reposition themselves from being socialist artists in an ivory tower to being filmmakers and producers within a post-socialist state in the global market. 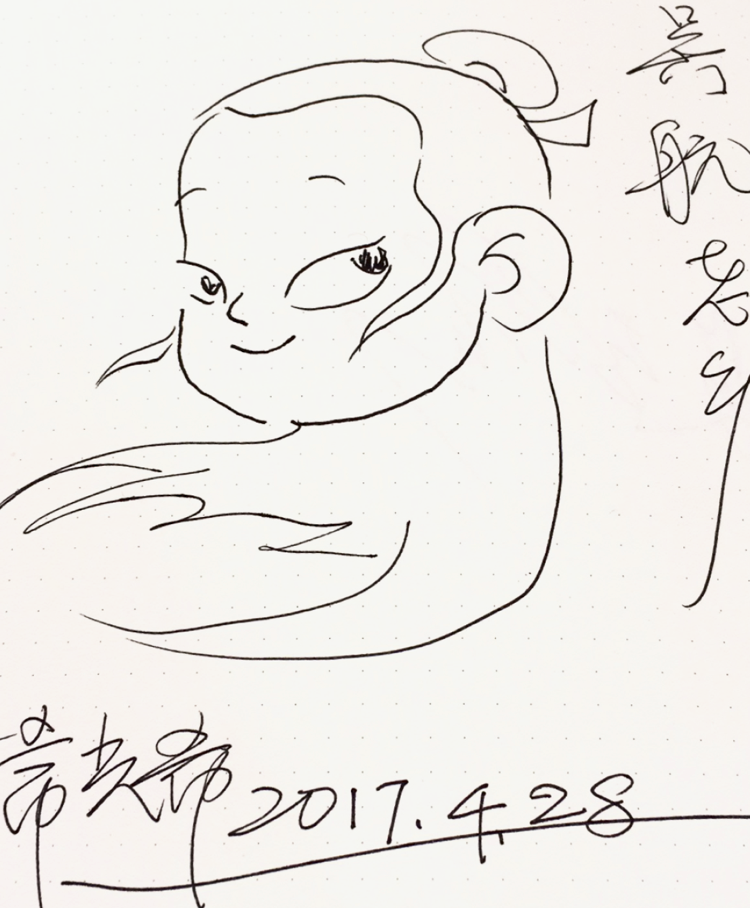 Chenxiang, the protagonist of Lotus Lantern, has been a very popular animated figure, and personally dear to me. I was lucky enough to receive a cartoon drawing of Chenxiang from Chang as a gift (Figure 3). Furthermore, I was happy to find out that Chang and I share the same hometown of Chongqing. I took advantage of being a student assistant at the forum and collected many drawings from these renowned animators, such as Monkey King from the couple Yan Dingxian and Lin Wenxiao and the pig Zhu Bajie from Yan Shanchun. Ono Kōsei drew a princess for me. It is worth mentioning that Yan Dingxian, who was the key animation designer for Uproar in Heaven, must have been invited to draw Monkey King countless times—he even brought a professional kit with two water color pens, red and green, to the forum, fully anticipating this kind of on-the-spot request (Figure 4 and 5). He used the two colors of pens to draw the classical image of Monkey King in Uproar in Heaven. 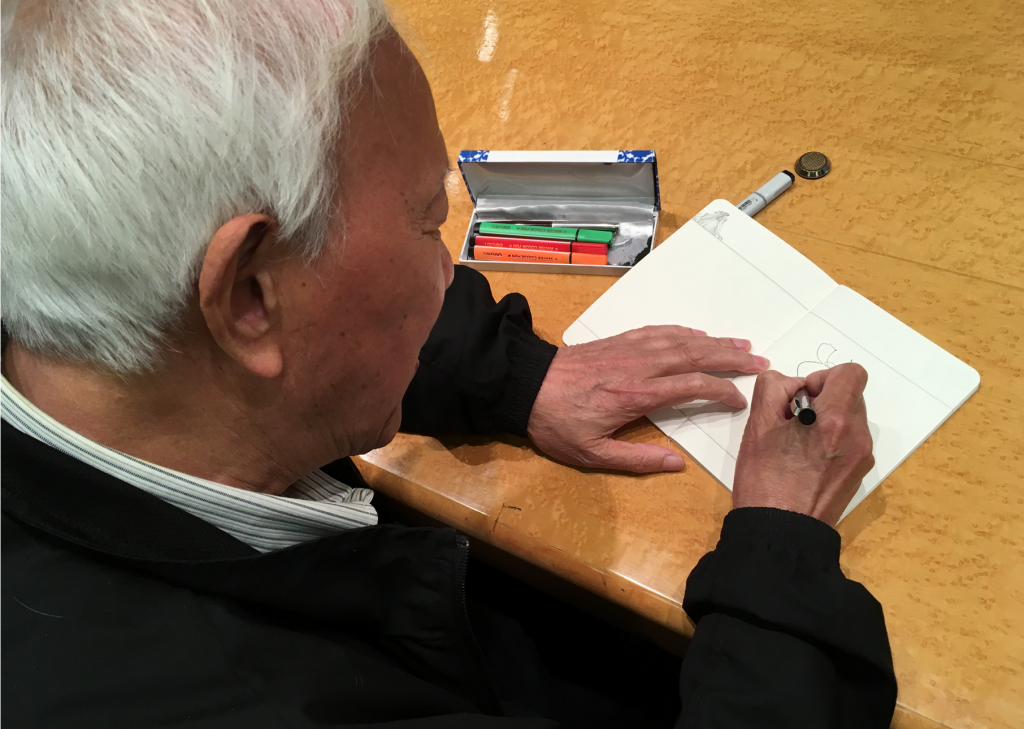 It was also an interesting experience to discuss different animated versions of Monkey Kings based on the story of Journey to the West during lunch and dinner times with these socialist animators. I was not yet born during the golden age of the Shanghai Animation Film Studio, which basically spanned the socialist period and the 1980s. Born in the 1990s, I grew up watching TV animation series. It surprised me that when I mentioned the TV animation series Journey to the West (1999), produced by China Central Television, many of these socialist animators told me that they had never heard of it. But it was obvious that all of them were quite familiar with Tian Xiaopeng’s animated feature film Monkey King: Hero is Back (2015), and we discussed this film a lot. While the TV animation series Journey to the West was very popular among my generation and Tian also participated in its production, it made me curious why socialist animators were not familiar with it. I do not have a concrete answer here, since this question would require both historical research about the networks of Chinese animation production and distribution, as well as theorizing the multiple factors behind how different animation genealogies come to be. A reflection on the history of animated filmmaking in postsocialist China may prove indispensable in further thinking through these issues. 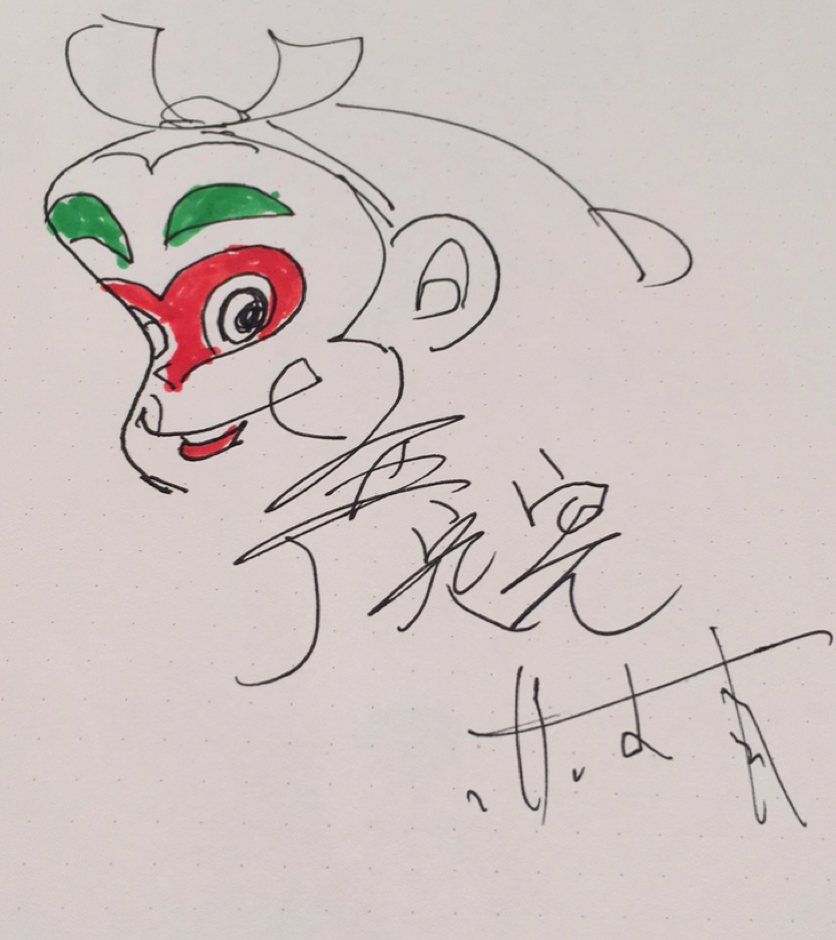 Due to the limited space here, I cannot report all of the wonderful things that took place at the forum. The organizers video recorded the forum and are now making DVDs with English subtitles , which will be deposited in the library of the Hong Kong University of Science and Technology and other major university libraries in North America.  Many old or unreleased animated films, such as The Dream to Be an Emperor (1947) and the experimental ink-painting animation segments, were shown at the forum and recorded in the DVDs. The English translation of the animators’ speeches at the forum will also be gradually published on ACAS website.

Hang WU is a PhD student in East Asian Studies at McGill University, Canada. She is currently writing on digital animation and media environment in China. Her articles have appeared in Animation: An Interdisciplinary Journal and Contemporary Cinema (Dangdai dianying).