By Belinda Qian He

While the field of animation studies has expanded in the past decades, scholarly attention paid to the world of animation has been limited to either major works or dominant theoretical approaches from the United States, Europe, and Japan. Among the few exceptions, the launch of the Association for Chinese Animation Studies (ACAS) and the Chinese journal Contemporary Animation (Dangdai donghua) marked the emergence of Chinese animation studies as a promising (sub)field. However, many facets of Chinese animation remain overshadowed, understudied but overinterpreted. 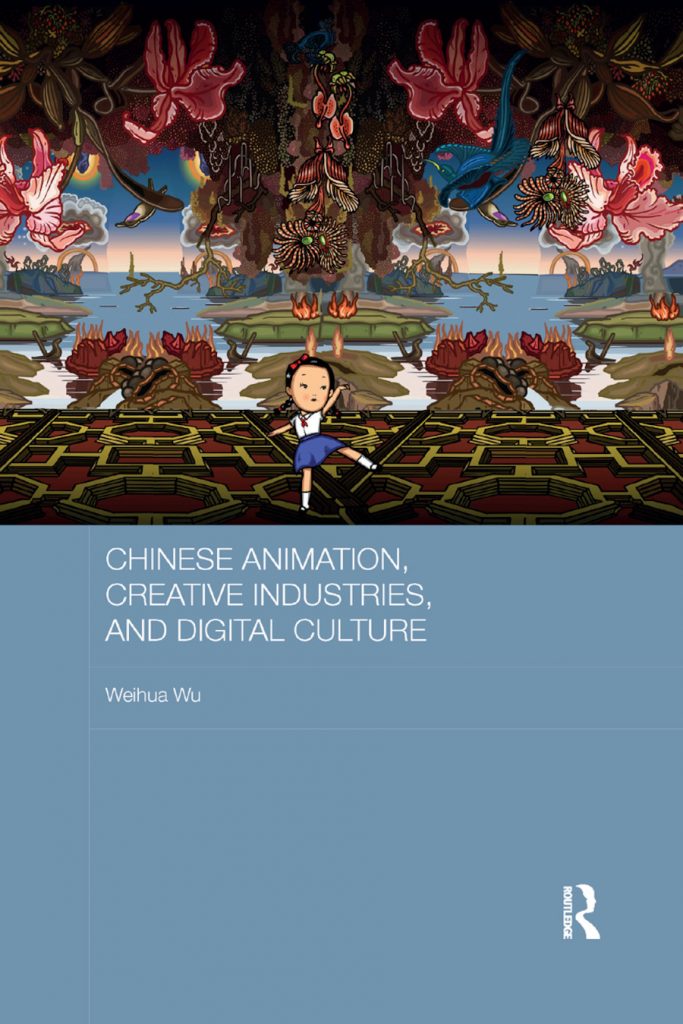 Weihua Wu’s Chinese Animation, Creative Industries, and Digital Culture offers a refreshing take on the story of Chinese animation in this respect. As part of an increasing body of scholarship that fills this gap and points out new directions in both the fields of animation studies and Chinese cinema/media studies, Wu’s book stands alongside other recent accounts, such as Rolf Giesen’s Chinese Animation: A History and Filmography, 1922-2012 (2015), Sean Macdonald’s Animation in China: History, Aesthetics, Media (2016), and the special issues (“Animating Chinese Cinemas” and “Animating Chinese Cinemas II: Animation, Technology, and Media”) of the Journal of Chinese Cinemas.

Wu offers an ambitious and crucial attempt to historicize and theorize Chinese animation in an age of lasting importance, marked by the mutual encounters between socialism and capitalism, neoliberalism and digitalization, and the culture of iGeneration youth. He argues that the transformation of Chinese animation during the past few decades is fundamentally a set of social products, created and implemented within a complex milieu of cultural, political, and economic conditions. In other words, it is a process of mediation that needs to be understood “beyond the limitations of the nationalist filmmaking, orientalism, and postcolonial mimicry of the animation industry” (pp. 182). In Wu’s view, such a process conceives the Chinese imagination of consumer society through the re-establishment of Chinese animation as negotiations between the authoritarian-structured Chinese School of Animation (a unique national style established by the Shanghai Animation Film Studio) and the alternative, emerging minjian (literally, among the people) filmmaking practices. The dynamics of the violent diversification, grabbism, and pastiche within the minzu (national/ethnic) style and popular practices of Chinese aesthetics in animated images are recognized in the book.

Wu starts with a remarkable, careful observation of “the problematic of the cultural redefinition of animation and its relationships with recent trends in Chinese society” at the intersection of animation production, education, and research (pp. 1-2). As Wu clearly addresses, the overwhelming commercial discourse of the “animation industry” that occupied the blind spots in Chinese cinema studies has shaped the dilemma of animation studies in China today. One of the major contributions of this book lies in its exploration of how meishu (fine arts) film was socially, politically, and culturally constructed, and has been transformed into the state discourse of the animation/cultural industry.

The second chapter traces the discursive construction of Chinese animation through three key concepts: minzu style, meishu films, and the Chinese School of Animation. Differing from previous studies that mostly either consider meishu film as an established genre or understand the “Chineseness” of Chinese animation as given, Wu questions the given nature of both of these categories. The chapter does not merely examine the historical roots of the Chinese School of Animation as politically charged, in relation to the calling for “Chinese style and spirit,” an orthodoxy that has dominated all fields of Chinese literature and arts since it was presented by Mao back in the 1930s (pp. 17). Rather, it also points out the other side of the story: a more complex, unmotivated process of being named reversely through Chinese animation’s particular encounters with international film festivals in the 1950s (pp. 21-25). Wu further reminds readers of the Chinese School of Animation as a conscious struggle defined by “the inequality between two different structures of visualities:” “the visuality of tradition interpreted by ‘westernized’ cinematic language” and “the visuality of revolutionary minzu (national) style” (pp. 26).

Likewise, for Wu, meishu film was identified as a unique, nationalized cinematic form within Chinese visual history and yet is much more than that. The third chapter continues the line of inquiry into the rise and fall of the Chinese School of Animation through the afterlives of meishu films since the Reform era. Focusing on several case studies of animated films and television programs, Wu analyzes the dynamics among animation spectatorship, state power, and other cultural forces shaped by the new market economy (including external transformative factors such as imported foreign animation on Chinese television, the transformation of state-owned studios, etc). What deserves special attention is the dual discourse that the story of Chinese animation has carried—meishu film as both “a historical catachresis” and “a child-oriented media product” (pp. 73). Beyond the existing discussions, Wu highlights the 1980s as a turning point that links the pre-digital and digital animation periods, during which the Chinese School of Animation assembled a historically collective pattern of production and reception that was at once, paradoxically, valuable and overburdened: “It was given meanings, under the gaze of global viewers, for its oriental aesthetics, but at the same time it was limited and qualified in a particular visual formation for the sake of the understandability of local spectators, who still received the didactic clichés” (pp. 68).

In the fourth chapter, Wu then turns to the ways in which Chinese animation has to resituate, rebrand, and “reinvent” itself in a new position. He reveals the practical essence of the term “post-meishu,” which is understood as more an innovative model of commercialization than an aesthetic style or visual experience. In other words, the idea of “post-meishu” animation fundamentally functions as a mode of production in service of the industrial, systematic transformation of Chinese animation in the CGI-driven contexts. Although both the fourth and fifth chapters engage with the diverse genres and hybrid forms of computer-generated animated images (what he calls “a digital labyrinth that combines mathematical equations, cyber text formats, live-action images, illustrations, moving image cartoons, and abstract lines and colors” pp. 72), the latter chapter remarkably pushes the boundary between the mainstream and the marginal. In chapter five, Wu’s concerns about web-based Flash animation practices and animators (shanke), show a profound shift from the question of “how the alternative forms of Chinese animation differ” to that of “where they locate themselves.” Wu points to the dilemmas that Flash animators have faced and also shared with other filmmakers and artists, one of which might be summarized as the enduring negotiation between “an independent spirit and an eagerness to ‘go mainstream’” (pp. 140).

This book will be of great interest to scholars and students in the fields of animation and ACG (Anime, Comic and Games) studies, post-socialist history, film and popular cultural studies, new media and communication, creative industry, China area studies, and so forth. In Wu’s historical examination, Chinese animation shared aesthetical, cultural, and ideological dynamics with film and other media forms of the time, but it was unique in its language and social lives. Wu argues that meishu film in particular, beyond a genre or a cinematic form, does have a history of its own. I see Wu’s book as a potential response to the question raised by Thomas LaMarre, “what constitutes the ‘Chinese’ aspect of Chinese animation?”[1] Both LaMarre and Wu share the view that the animations labeled Chinese are so diverse in historical, cultural, and stylistic terms that it would be hardly possible to understand the production of Chinese animation in terms of historical continuity or seamless development. Besides, as LaMarre says, “the unity of ‘Chinese’ animation, then, is neither national nor regional, and yet somehow both, much as with ‘Japanese’ animation.”[2] Wu’s book goes beyond the conventional understandings of Chinese animation as relatable to the ongoing debates over Chinese national cinema by making the following moves: first, historicizing and problematizing the “Chinese” and Chineseness embedded in Chinese animation discourse; second, addressing the ambiguity of minzu style, which is neither a synonym for the state’s cultural policy nor a nationalist discourse, but more complexly, “the process controlled and fashioned by the political authority” along with “impressive autonomous tendencies” (pp. 27); third, understanding Chinese independent animation in a new light by breaking down conventional binaries like the independent/state, art/industry, or mainstream/marginal dichotomies and complicating the key players across the professional divide.

What might be missing from this book and deserving of further research include the following aspects. First, we may need a more careful rethinking of Chinese animation beyond the visual.  For example, sound is not only a key component of “the Chinese School of Animation,” but also crucial to animated imagery and video in cyberspace. Second, we need a clearer explanation of what animation spectatorship means exactly and how it works differently as deployed across time. The concept of spectatorship is highly theorized in the American-European contexts but necessarily debatable in China. Third, this book calls for more specific discussions of the relationship between animation spectatorship and youth culture. How do the two define and shape each other? More analysis that can bridge Chinese animation studies and film theories is also needed. In addition, does the linear structure that this book implies work in contradiction with its own premise? The book would be a more compelling and appreciable account of Chinese animation if it could have been located in dialogue with other historiographies of Chinese cinema and intermedia practices, as well as some recent media scholarship that pioneers the interdisciplinary, boundary-crossing realm of “animating film theory.”[3]

Chinese Animation, Creative Industries, and Digital Culture is a noteworthy book in many respects. Weihua Wu invites us to see Chinese animation as “a collective political practice more than an aesthetic practice,” as “an ethnographic image more than as an array of artistic imagery” (pp. 19), the historical and theoretical writing of which is a “long march” that is never done.

Belinda Qian He is a PhD candidate in the Department of Comparative Literature, Cinema & Media at the University of Washington. Her research revolves around the historical and interdisciplinary study of East Asian cinema, photography, art, visual criminology, and display culture, associated with atrocity, violence, and witnessing. Her article on Chinese animation has recently been published by the Journal of Chinese Cinemas. Her dissertation is tentatively titled The Invention of Hostile Views: Class Struggle, Exposure, and Cinema as Show Trial in China, 1925- 1985. Her ongoing project on image and justice is funded by the Asia Art Archive and The Robert Ho Family Foundation. She is a current Mellon Fellow (2018-2019) and is co-organizing the Inter-Asian Historiophoty Research Group with Ungsan Kim and Xiaoshun Zeng.