Puppets, Gods, and Brands: Theorizing the Age of Animation from Taiwan is a truly unconventional book about animation. It is unconventional not because it is so deeply interdisciplinary, ranging from religion, film and media studies, psychoanalysis, sociology, to East Asian studies, but because it is essentially an anthropology of animation. Rather than discussing any specific animated films or animation studios, the book focuses on the culture and fan practices surrounding the Pili puppetry videos in Taiwan. And yet, the book does live up to its promise to contribute to animation studies in that the author strives to broaden the definition of animation so that the very idea of animation can engage culture and politics in ways unthinkable before. 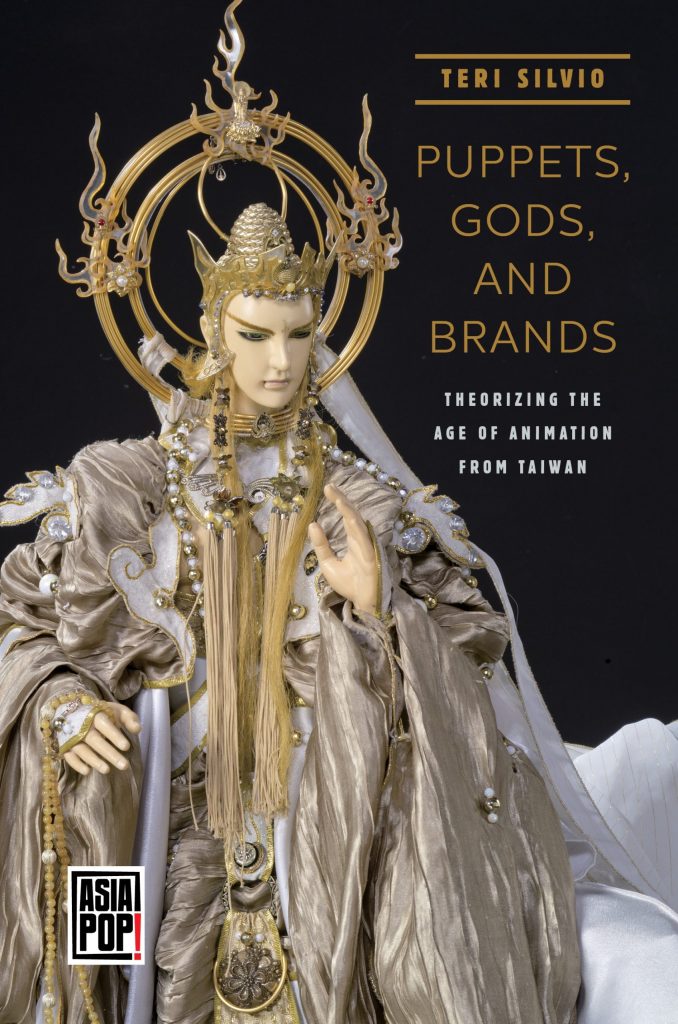 As is well-known, the classic definition of animation revolves around the frame-by-frame construction of movement. Whereas Norman McLaren famously underlines the priority of frame difference over frame content to establish the medium-specificity of animation, Disney devotes itself to create “the illusion of life” with various animation tenets such as squeeze and squash, anticipation, or follow-through. However, Silvio sidesteps the classic view and goes straight to the idea of animation as “life giving,” and extends it to “the construction of social others through the projection of qualities perceived as human-life, soul, power, agency, intentionality, personality, and so on—outside the self and into the sensory environment, through acts of creation, perception, and interaction” (19). In other words, Silvio views animation as a social process that comes with the full complexity of intersubjectivity. And it is mainly from the idea of projection process that allows Silvio to articulate animation with performance, which in turns allows her to make an even bigger claim of the Age of animation. Following Jon McKenzi’s contention that “performance will be to the twentieth and twenty-first centuries what discipline was to the eighteenth and nineteenth” (2001:18), Silvio claims that animation has superseded the older paradigm of performance.

In order to demonstrate how we have entered an Age of Animation, Silvio constructs a theoretical model calls “the ang-a mode of animation” from her years of ethnographic work in virtually every aspect of the Pili puppetry video production and fan practices, embedded in the broader network of folk religion and popular culture in Taiwan. Since the ang-a mode of animation is her unique making, Silvio focuses on the exploration and elaboration of its definition, stakes, and development in the first three chapters. Once that theoretical construct is established, the latter half of the book goes on to discuss gender, cosplay, and affective labor involved in the Pili fans’ various animation practices, with chapter 6 focusing on the participatory fan production of the Japanese franchise Axis Powers Hetalia and the funü subculture in Taiwan.

First, in Introduction, Silvio gives an interesting example of what she means by animation: If a person pretends to converse with a cat and speaks in the imaginary voice of the cat, it can be considered an act of animation. But Silvio only considers it animation in a “technocratic society” like Taiwan; in the context of animistic society, the enacted cat speech does not count. As such, Silvio reconceptualizes animism and animation in respect to the social and historical process.

In Chapter 2, Silvio articulates animation with performance, which she defines as “the construction of social selves (individual or group identities) through the introjection of qualities from exterior models (roles, images) and the expression of those qualities through the medium of the body (speech, gesture, etc.)” (18). Recalling her definition of animation as an outward projection to construct social other, we can see performance is more about introjection, with the physical acting out of “social selves.” Thus, by setting up the pair of animation and performance, Silvio explicates one with the other and build the foundation of her anthropology of animation.

Chapter 2 works on her own theoretical model of the ang-a mode of animation. Ang-a is Holo, synonymous with ou in Mandarin, referring to “anthropomorphic images that range from religious images to mass­ produced toys, a category that gathers together the ideas of personality, rep­lication, companionship, attractiveness, stylization, and play” (59). This ambiguous demarcation between gods and toys—a characteristic shared by the greater East Asia in Japanese or Hindu culture, allows the convergent point of “the fields of religion, play, politics, commerce and art in Taiwan” to emerge in the ang-a culture(53). The ang-a culture is further complemented by the mode of animation, by which Silvio means “a sort of meta-genre, a collection of practices bound together by the types of objects seen as animatable, the kinds of human characteristics with which they are invested, and the kinds of actions through which this investment is accomplished” (15). As such, the ang-a mode of animation becomes a broad enough theoretical model that attempts to capture the cultural logic of contemporary global digital culture based on the local animation model of the ang-a from Taiwan.

Following upon the previous two chapters, Chapter 3 examines the ang-a culture in the cutified deities toys in the shenming gonzai as manifest of the ang-a culture. Silvio considers the cutified deities the Winnicott transitional objects that help collectors, mostly women and working-class young men, to mediate the multiple spheres of religion and secular life, play, and commerce through the introjection and projection process of animation and performance.

Chapter 5 further analyzes the effective labor of Pili fans animation with a critique of the lack of the pink-collar sector in the Autonomist theory of immaterial labor, specifically, its neglect of the gendered affective labor. As Silvio argues cogently, it is the respite from the extra burden of emotional labor in post-Fordism that the Pili women cosplayers find so appealing. That is, with their act of animation, the Pili cosplayers (who are predominantly women from the service and retailer industry) can be temporarily exempted from the demands of emotional labor.

Chapter 6 continues to explore fan production for the possibility of a collective project for identity politics with Axis Powers Hetalia, a Japanese anime/manga franchise that personifies national character. Silvio underlines how in the APH fandom the funü subculture keeps interpretations open, and for Silvio the participatory culture of tongrenzhi (dojinshi) acts as an alternative to neoliberal reification of personhood (the obsession with branding).

Finally, in the Conclusion chapter, Silvio calls for a rethinking of fetishism and psychological projection, the two long-stigmatized and yet such central concepts to her anthropological project of animation. And indeed, as she demonstrates with her ethnography of animation practices, there is potentiality inherent in the animation act for alterity and community beyond our day-to-day experiences dictated by capitalism. As such, the book is pointing toward a sort of utopianism with such a project of an anthropology of animation.

In all, Puppets, Gods, and Brands is provocative to the field of animation. But the book certainly has a lot to offer for its ambitions to bring together such wide and diverse range of subjects, which offers not only cross-disciplinary but also cross-cultural conversations that, as Silvio points out, has been dominated by the Japanamerica discourse (Roland Kelts) in animation culture and animation studies. And for that, the book brings forth a fresh perspective, or even better, an alternative model from Taiwan.

Peng-yi Tai is Associate Professor in the English Department at National Central University, Taiwan. She has an MFA in animation and received her PhD in Visual Studies from the University of California, Irvine. Her research interests include labor and aesthetics in animation, new media and critical theory. She has published articles on computation animation, Pixar and early American animation in Animation: An Interdisciplinary Journal, Chun Wai Literary Quarterly and Journal of Taipei Fine Arts Museum.