“Look how nice it is to be Monkey King. No parents, no control. Just do as he will. And no shifts of WTO (World Trade Organization),” says Guo Binbin, a tragically passionless hero in Jia Zhangke’s film Unknown Pleasures (2002). Binbin is an unemployed 19-year-old who does not dare to kiss his teenaged sweetheart. In a room rented by the hour, the couple keeps watching Havoc in Heaven (1961-64), directed by Wan Laiming and produced by the Shanghai Animation Film Studio (SAFS). Havoc in Heaven is a two-part animated feature film made during the Mao era. The aimless couple in Unknown Pleasures most likely have no idea about the socio-cultural background behind their favorite animated film. Neither would they know about the cultural, philosophical and ideological contexts that have evolved since the Ming Dynasty novel Journey to the West, from which the animated feature film was adapted. They perceive Monkey King as a liberated, unconstrained and carefree pop-culture superhero (Fig 1).

Yet, it hardly seems a coincidence that the excerpt from Havoc in Heaven that Jia Zhangke presents to his viewers shows a scene of Monkey’s humiliation. Monkey, a great sage and warrior who has just been appointed as a Heavenly Peach Garden guardian, stands dwarfed in front of a laughing group of heavenly maidens who know very well that his grand title is fake, part of the Jade Emperor’s scheme to tame and ruin all of Monkey’s aspirations. Before Monkey can commence his dreadful rebellion in the heavenly palace, he has to go through the spectacle of being a useless fool. While film critics and historians rightly praise Wan Laiming’s adaptation as a jewel of classic Chinese animation with uplifting spirit and masterful aesthetics, the film’s subtle duality should be also acknowledged and examined through close reading. 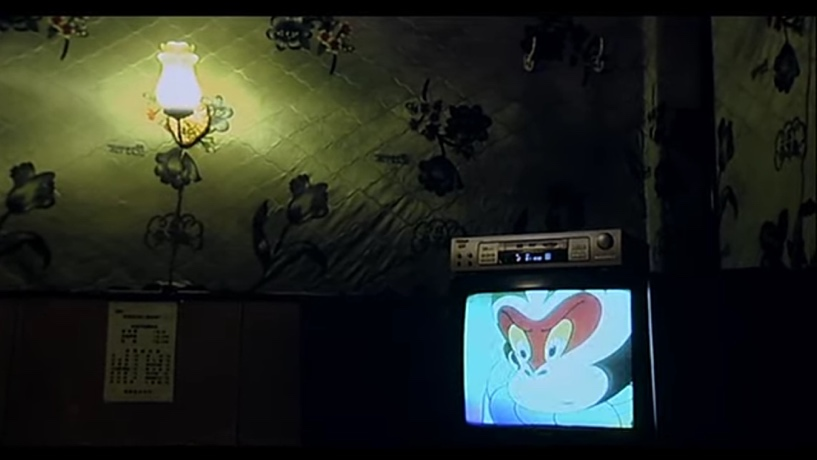 Wan Laiming’s adaptation went down in world animation history as a refined feature film that manifested the brilliance of hand-drawn cel-animation driven by the vibrancy of a colorful palette, exquisite lighting and cinematography that brings out sensations of glamour and magic. The music score goes through notes of being tender, frivolous or solemn, but it is never a tune of propagandistic militancy. The musical compositions draw upon opera traditions, and the choreography of the animated movement evokes traditional gestures, poses or acrobatics. Yet the film does not build its integrity solely from opera as a means of expression, nor does it attempt to reproduce the stage play through the animated medium. Opera serves as only a complementary artistic reference. Certainly Wan Laiming’s artistic vision was a leading factor, but such a long-lasting, costly and culturally important production could have not been successfully fostered without significant contributions of other SAFS workers, among them animators and designers Lin Wenxiao and Yan Dingxian, chief cinematographer of the studio Duan Xiaoxuan, vice director Tang Cheng, as well as eminent art collaborators in background design: famous manhua artist Zhang Guangyu and his brother Zhang Zhengyu. The memorable and sophisticated visuality of Havoc in Heaven is frequently discussed in academic and popular writing, together with its immersive narrative power.

Several sources have discussed the artistic and intellectual qualities of Havoc in Heaven. Marie-Claire Quiquemelle introduced the achievements of Wan Laiming and his brothers (mainly Guchan and Chaochen) into Western film studies in the early 1990s.[1] A detailed account of this film can be found in Li Baochuan’s Studies on Wan Laiming.[2] Hongmei Sun, in her monograph Transforming Monkey, presents Wan Laiming’s film against the background of various cultural adaptations.[3] Rudolf G. Wagner, a distinguished Sinologist from Heidelberg University, has noted the film’s success in terms of artistic achievement and audience outreach.[4] Wagner was especially interested in the chain of intermedia adaptations that led socialist animators to “reclaim” the story of Monkey’s rebellion in Heaven in Mao’s China. In the original story, Monkey is defeated and imprisoned under a mountain for 500 years. Socialist animators changed this ending by remolding (gaizao) Monkey King into a victorious hero over a wretched Jade Emperor, and I have discussed the various remoldings that occur in Havoc in Heaven elsewhere.[5] Readers interested in detailed analyses of filmic expression should refer to Sean Macdonalds’ Animation in China, which examines intertextual relations between Havoc in Heaven and Zhang Guangyu’s famous manhua collection Cartoon Journey to the West (Xiyou manji, 1945).[6]

In history, it was common for animators and filmmakers to use allegories or metaphors in order to bypass censorship. Many animated films produced in the USSR, other Warsaw Pact countries, and the USA in the McCarthy era often appear elusive and have content with subversive potentials that countered strong political pressures (so-called “artistic contraband”). However, this notion has to be reformulated in the context of socialist cinema under Mao. Havoc in Heaven, praised in socialist China as a spectacular and artistic achievement, does not lean toward ideological subversion, nor does it convey the dominant doctrine in a sloganeering and oversimplified manner. Detectable intellectual hesitations and even doctrinal deviations should be analyzed in the spirit of ideological criticism. In other words, it is worth analyzing Havoc in Heaven in regard to its textual potency of revisionism and/or escapism.

Many socialist films in the early 1960s were characterized by a distinction between positive and negative elements of the imagined world. Notions of what is “right” and “wrong,” imprinted in visuality and storytelling, is a black or white issue that leaves no room for ambiguity. The mesmerizing world of Havoc in Heaven and its revolutionary hero appear much more complex in comparison. In discussions of the role of art in socialist China, it is important to outline the conflict between utilitarianism and individualism, with the former upheld as a desired and cherished principle and the latter associated with reactionary sentiments against the masses. Without doubt, Monkey King embodies the revolutionary masses, but the film also portrays him as a self-oriented individual. In the drunken sequence, Monkey is depicted as an intoxicated and lonesome character indulging in his own misery and humiliation, thus transgressing the anti-subjectivist and anti-individualist core of the socialist doctrine.

These kinds of political issues are pushed to the background by the extraordinary aesthetics more prominent in the film. Refined designs and photography enrich the image of Heaven as a spectacular and magnificent palace, which is devalued as negative in the narrative. Sequences of the Monkey King traversing through Heaven give the viewer pleasant sensations, characteristic of smooth and brilliantly executed animated films. The animators of SAFS seemed to counter-balance the ideological features of the work with a deep focus on the aestheticization of the filmic experience. Perhaps it is the visuality, marked with gentleness and tenderness, that above all proves the respectful approach of the SAFS artists towards cultural heritage.

Olga Bobrowska is a film and animation scholar who obtained her PhD in Humanities (Art Studies) at the Jagiellonian University in Kraków (Poland) in 2020. Her dissertation discusses trends and tendencies in Chinese animation between 1957 and 1989. She has presented and written on Chinese, Polish and European animated film and co-edited two monographs: Obsession Perversion Rebellion. Twisted Dreams of Central European Animation (2016) and Propaganda, Ideology, Animation. Twisted Dreams of History (2019). She is also a festival director of StopTrik International Film Festival (Slovenia/Poland).