John A. Crespi’s Manhua Modernity: Chinese Culture and the Pictorial Turn represents an important contribution to the study of print and visual cultures in mid-twentieth-century China. Given the prominence of Republican Shanghai in Crespi’s narrative, this book might also be seen as part of a broader attempt to re-assess the place of this city in the story of modern Chinese print and visual cultures—a trend that is evident in other recent monographs, such as Pedith Chan’s The Making of a Modern Art World (2017) and Paul Bevan’s “Intoxicating Shanghai:” An Urban Montage (2020). Like such scholarship, Crespi’s book challenges what he refers to as the “anti-urban bias” (27) inherent in some earlier work in the field. Yet Manhua Modernity goes much further than this, providing a new set of methodologies for “horizontally reading” pictorial magazines. Indeed, Crespi should be congratulated for his methodological and conceptual ambition, for he seeks not simply to re-assess the evolution of manhua per se, but also to demonstrate the potential contribution of such a re-assessment to fields such as “pictorial studies” and visual cultures. Manhua Modernity contextualizes the manhua form (even as it takes issue with some of the existing literature on the topic) and updates an earlier fascination with images as stand-alone objects. Crespi’s approach also helps to free the history of manhua from a “nation-centered narrative” (34), as per Bi Keguan’s much cited work on the topic and seeks to bring the very notion of “manhua”—a term that Crespi refuses to italicize—into the mainstream of Chinese cultural history. 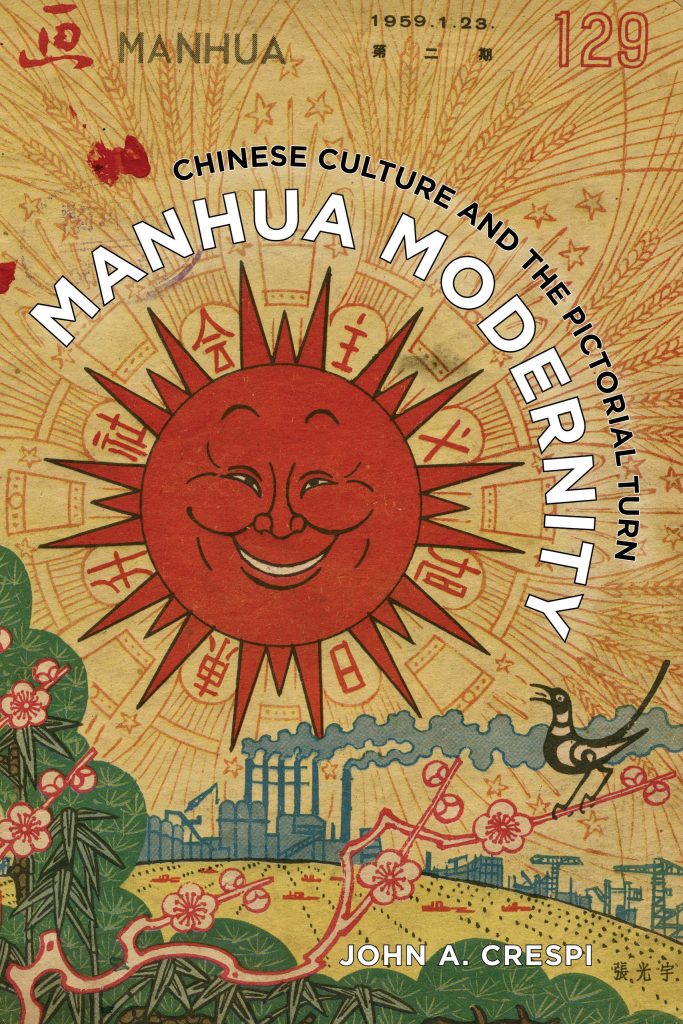 Perhaps most importantly, Crespi’s book challenges the “genre approach” that has so often reduced manhua to “cartoons” (15). For Crespi, manhua cannot be properly understood if they are separated from the context in which they first appeared, i.e., the rich print culture of early-twentieth-century Shanghai. Indeed, as the book’s subtitle suggests, Crespi’s approach is one which reads manhua “…in dynamically mediated relation to the pictorial magazine” (3). We need to appreciate manhua in relation to the photographs, advertising art, serial fiction and poetry that they sat alongside (and interacted with) in such pictorials. Crespi urges us to acknowledge the “heterogeneity” and “seriality” of pictorials as “interactive matrixes” of image and text. In this regard, Manhua Modernity might even be read as a thoughtful reflection on the long shadow that the pre-war Shanghai pictorial still casts over Chinese media and visual cultures (with Crespi drawing links in the epilogue between the pre-war pictorial and social media in China today).

To be sure, Crespi has not set out to write a “general history” of manhua in the style of John Lent and Xu Ying’s Comics Art in China (2017). Crespi fully admits that the “beam” he shines on manhua is “narrow and selective” (151), and that the place of manhua in various forms of visual media beyond the pictorial magazine newspapers, propaganda posters, or cognate forms such as lianhuanhua, for example—has not been addressed in depth in this book. Readers searching for a discussion of the use of manhua in the propaganda produced in communist Yan’an or Japanese-occupied Beijing, for example, will not find it here. Nor will they find an analysis of the work of major names associated with this form in earlier scholarship (e.g., Feng Zikai), for Crespi’s account is one driven mainly by a set of protagonists first associated with the magazine Shanghai Sketch (and, later, Modern Miscellany), including (though not limited to) Zhang Guangyu, Ye Qianyu and Zhang Leping.

Crespi’s argument for the need to consider the development of manhua in tandem with the evolution of the generic Shanghai pictorial is laid out in Chapter 1. Here, Crespi suggests that the manhua featured in such pictorials “…helped city dwellers imagine and enact an alternative story, a shadow history bound to a space and time both close at hand and connected to a global narrative of life in the modern city” (57). Crespi interprets Ye Qianyu’s well-known strip Mister Wang, for instance, not as a mere copy of earlier strips in European and American pictorials, but as something that was immersed “in the flow of city experience” (56). Shanghai Sketch and similar pictorials addressed issues such as the life of rural immigrants in urban Shanghai, but also reflected on their own role in documenting and critiquing the city.

A similar approach is adopted in Chapter 2, as Crespi shows how the pictorial form was transformed following the Japanese invasion of China in 1937. Here Crespi examines the work of intellectuals who travelled westward in the service of the Manhua Propaganda Corps, and who sought to “reinvent” manhua and the pictorial magazine for a new context. In a besieged Wuhan, the urbane and cosmopolitan artists of Shanghai Sketch adopted a self-reflective approach exemplified in Resistance Sketch—a pictorial that incorporated a “mutually resonant array of micronarratives” which gave readers and artists alike “a framework for their own passages into wartime” (80). Resistance Sketch not only incorporated new stylistic innovations (such as the “woodcut aesthetic affiliated with the lower classes”), but also consciously reflected on what it meant to be an intellectual refugee from the coast who, in a rapidly changing wartime context, had been “thrown into a state of ambiguity and transition” (67).

If the argument for reading pictorial magazines and their heterogeneous content “horizontally” is presented convincingly in Chapters 1 and 2, Crespi adopts a quite different approach in Chapter 3. Here he undertakes a close reading of Zhang Guangyu’s 1945 exhibition Manhua Journey to the West. In this wonderfully illustrated chapter, Crespi’s insistence on reading this exhibition as “a tribute to the art of the pictorial through the art of manhua” (95) becomes harder to sustain. Crespi is justified in highlighting “resonances with the illustrated magazine” (87) inherent in this exhibition, as well as direct references to the generic pictorial itself in some of Zhang’s images. However, I could not help feeling that Crespi had been too insistent on bringing his interpretation of this politically satirical manhua exhibition into a story that is tied so tightly to the rise and fall of the pictorial. In addition, this chapter misses an opportunity to explore in greater depth the very nature of exhibitions as a means of displaying (and consuming) manhua (though this is touched upon on page 85) or the rise of related media such as lianhuanhua (which is mentioned only in passing at the start and end of the chapter).

Chapter 4 returns the reader to the much safer ground of the pictorial, with Crespi offering a reading of Manhua yuekan—a magazine that promoted the manhua form in the early years of the PRC. This chapter complements the institutional history of the same magazine that has been written by Jennifer Altehenger. Crespi offers a convincing case for interpreting this publication as not simply a CCP innovation, but as a magazine that offered readers a “mélange of styles and conventions in the tradition of the magazine miscellany.” For example, a genre of content which emerged in Manhua yuekan, and which Crespi refers to as “everyday satire,” clearly did hark back to practices first explored in magazines such as Shanghai Sketch, even while it adhered to socialist sensitivities. However, Crespi’s arguments about PRC readers “peering between the lines” of satirical depictions of the United States in Manhua yuekan by artists such as Zhang Guangyu are more difficult to defend (if only because not enough evidence about reception of this magazine is provided).

The temporal scope of Manhua Modernity, spanning as it does the 1930s, 1940s and 1950s—decades that are increasingly defined as distinct “periods” in the field of modern Chinese history—is refreshing. Indeed, Crespi has provided an excellent template for bridging the divide between the study of Republican China and “PRC history” via print culture. Geographically, however, one cannot help wondering if Crespi’s approach is at times too Shanghai-centric. Crespi is entirely justified in situating the origins of manhua in periodicals such as Shanghai Sketch. However, in the subsequent development of manhua (and, indeed, pictorials), might we not also acknowledge the importance of artists who emerged in other major urban centers (as well as non-urban areas)? Similarly, while Crespi’s skepticism about turning the history of manhua into a purely Chinese (i.e., national) story is welcome, his book provides few indications of where we might place the work of artists who did choose to throw their lot in line with various “nation-building” projects (in the history of the manhua form—and of pictorials—the work of artists of the Right who dedicated their skills to undermining Chinese communism, for example, continues to be often ignored). While Crespi’s “shadow history” of manhua thus aims to undermine the “national” scope adopted in earlier work (such as Chang-tai Hung’s War and Popular Culture: Resistance in Modern China, 1937–1945), his resulting narrative also overlooks people, places and institutions that do not share a connection to Crespi’s Shanghai artists and their publications.

University of California Press should be congratulated on producing a beautiful book—and one that is available in open access form through the Luminos Platform. Great care has been put into the reproduction of manhua and pictorial pages in color from an array of sources. As a result, this book—like the very pictorials that Crespi analyzes—is a highly attractive object and a pleasure to read. Crespi must also be commended on successfully incorporating complex theoretical musings into highly accessible and at times playful prose. The result is a book that scholars, students and lay readers will find rewarding. Manhua Modernity should be read by anyone with an interest in the print, media and visual cultures of modern China.

Jeremy E. Taylor is Associate Professor in the Department of History at the University of Nottingham, UK. He holds a PhD in history from the Australian National University. He works on the modern cultural, social and political history of East and Southeast Asia, and his research, on topics ranging from Diasporic film history to modern personality cults, has been supported by the Arts and Humanities Research Council, the British Academy, the European Research Council and other organizations. He is the author of Rethinking Transnational Chinese Cinemas: The Amoy-dialect Film Industry in Cold War Asia (Routledge 2011) and Iconographies of Occupation: Visual Cultures in Wang Jingwei’s China, 1939-1945 (Hawaii University Press, 2021), and is the editor of Visual Histories of Occupation: A Transcultural Dialogue (Bloomsbury, 2021). In addition, his work has been published in over 25 different journals, including Journal of Asian Studies, Journal of Contemporary History, Gender & History, Comparative Studies in Society & History and Modern Asian Studies.