From March 1st to May 12th, 2021, I participated in the Inaugural Conference of the Association for Chinese Animation Studies (Zoom webinar), organized by Professor Daisy Yan Du at the Hong Kong University of Science and Technology (Fig 1). Especially my being a graduate student, the conference provided me with the unique opportunity to learn about and discuss the latest research on Chinese animation. This experience was complemented by virtually meeting with leading scholars, renowned animators, and colleagues in the field. Moreover, I was given the novel chance to share my project with attendees.

Fig 1: Presenters at the Inaugural Conference of the Association for Chinese Animation Studies

The conference featured a diverse range of topics across its many presentations, thereby allowing audiences to get a broader sense of the field. Scholars lectured on topics from historical, transnational, location-oriented, and theoretical perspectives. In the first part of the conference, the talks, together, mainly followed a linear historical timeline, covering animation from the early 20th century to the contemporary. Since my research primarily attends to animation in socialist China, the talks on other time periods and styles, were beneficial in enriching my knowledge of the field and its history. I was particularly interested in the lectures that discussed independent animation, CGI, documentaries, and VR animation. In the second part of the conference, scholars shared their insights on the transnational ties between Chinese and Japanese animations and analyzed animations in mainland China, Taiwan, Hong Kong and Singapore. This geography-focused approach enables us to compare the animated productions created in these Chinese-related locations, and this, in turn, leads us to pose questions and ideas on how we define Chinese animation. For instance, should we analyze “Chinese” through a location-oriented, producers,’ or subjects’ approach? Beyond location, some scholars aimed to theorize Chinese animation studies through specific cases. For instance, during the panel “Theorizing Chinese Animation and the World,” Professor Marc Steinberg (Concordia University) analyzed the trajectory of Japanese animation/anime studies by providing a personal account of the development of this specific field in Montreal and offered insights into potential resources and pitfalls for Chinese animations studies. Also on this panel, Professor Daisy Yan Du proposed “suspended animation” as an aesthetic category of representation. As case studies, she analyzed animations that featured (de)animated Tripitaka, Jade Emperor, Chairman Mao and Stalin, with the aim of demonstrating the influence of political power on representations of stasis and immobility. In addition to this panel, several other presentations shared different ways to theorize and approach animation.

Viewing Chinese animation from an art historical perspective, I was especially excited to learn from the interdisciplinary methods presented at the conference. Near the start, a keynote speaker Professor Yingjin Zhang (University of California-San Diego) suggested we look “sideways” at Chinese animation studies. Referring to Thomas Elsaesser’s media archaeology, the “sideways” in Zhang’s analysis includes various artistic media and different aspects of animation productions, such as medium, image, and spectator. This sideways approach suggested by Zhang was applied and practiced in many presentations at the conference.

In the panel on early animation and cartoons, Professor John Crespi (Colgate University) contextualized Zhang Leping’s daily comic strip The Wandering Life of Sanmao (Sanmao liulangji) in the serial form of the daily newspaper. He suggested approaching the strip and other serialized sources as historical information by analyzing the interactions between the daily strip of Wandering Life and the daily newspaper. As a complement to Professor Crespi’s panel on the artistic medium of cartoons, the panel of “Chinese Animation and Live Action” revolved around the mediums of animation and film. Professor Jingyi Li concentrated on the role of movement in animation and martial arts films, revealing how both emerged in Chinese history as tools to negotiate with competing conceptualizations of bodily motion. These mediums served as such powerful tools because they both have the potential to shape a vernacular perception of space, time, energy, vitality, and physicality.

Beyond the role of medium-specificity, other panels honed in on the spectator’s role. The panel “Chinese Animation, Children, and Adults” examined children as the spectator. Among the presenters, Professor Lanjun Xu analyzed the film The Magic Kite (1958) and the animation The Sun’s Little Guest (1961). She argued that these works used the devices of animation, mainly anthropomorphism and medium plasticity, to portray the construction of children as young pioneers with an internationalist consciousness. This panel as a whole demonstrated the possibilities to contextualize Chinese animations in a wide range of studies.

In addition to the rich academic discussions, the conference highlighted presentations of animation archives. Mr. Tan Qiuwen from the China Film Art Research Center (Beijing, China) introduced the animation collections and publications held at the center. Ms. Wenning Liu, also from the center, screened five early animated shorts, including The Mouse and the Frog (cel, Wan Brothers, 1934), Songs of Resistance 2 (cel, Wan Brothers, 1938), Songs of Resistance 5 (cel, Wan Brothers, 1939), The Kite (cel, Liang Jin, 1944), and Dreaming to be Emperor (puppet, Chen Bo’er, 1947). During the Q&A session, Mr. Tan and Ms. Liu shared valuable information about the procedure for conducting on-site research at the center, which was quite helpful for academic researchers. In contrast to the institutional animation collection, Professor Christopher Rea (University of British Columbia) shared his project The Chinese Film Classics, which includes a sub-project on the early Chinese animation playlist (Fig 2). Although this project is a work-in-process, the open access resources posted by Professor Rea at the YouTube channel of Early Chinese Animation are a valuable site for researchers to use to find animated shorts with which to teach and research. These two archives were further linked to the contemplation of the display mode of animation, as Professor Zhen Zhang (New York University) proposed at the end of the panel. 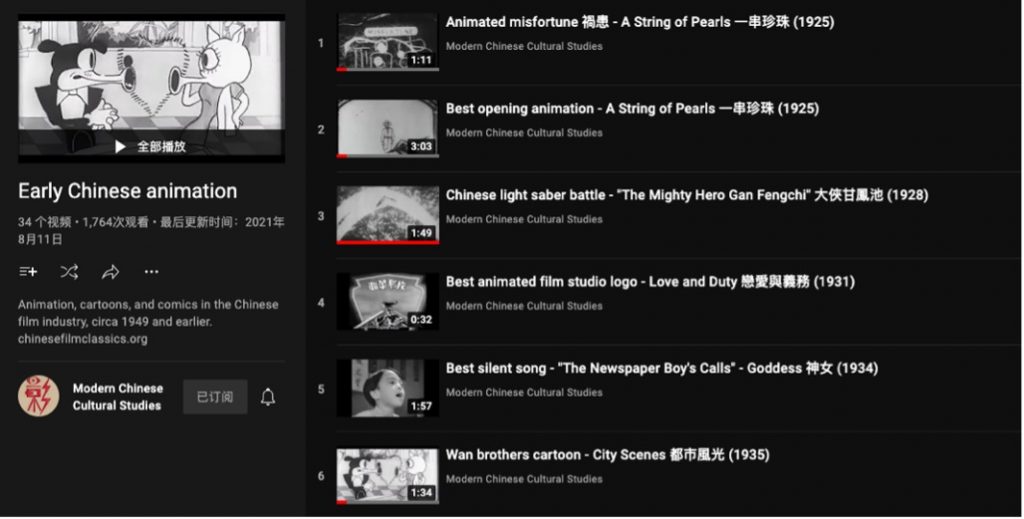 Since there would be no analysis without the creators, the three panels exhibiting animators’ perspectives was a highlight of this conference. These panels each zoomed in on different aspects within the world of animation, including the experience of women animators, the animation industry and technology, and independent animated filmmaking in the digital age. Among the many presentations, I was especially impressed by Mi Chai’s and Lei Lei’s works. Even though they are both independent animators, and artists and a couple working in animation, their works diverge in many ways. In Mi Chai’s talk, she even screened some of her productions. If The Face (2007), coproduced by her and Lei Lei, represents their style during their student years, the later works produced by Chai bear her artistic mark. For example, her recent works display a strong and carefully planned interaction between live music and animated performance, particularly in works like Captured Creatures and Spacetime Illusion (2015-2020) (Fig 3). In this series of works, local dancers’ performance at exhibitions resonates with live images of captured animals in zoos. In contrast, Lei Lei’s recent works take a more historical perspective, which is shown in his screened works, Recycled (2013) (Fig 4) and A Bright Summer Diary (2019). The former project compiles images from negatives that were collected from a recycling plant on the edge of Beijing, and through the film, Lei Lei unearths visual patterns hidden behind the depictions of the capital and the life of the inhabitants over the last thirty years. The latter film is inspired by an old photo of the artist at Lushan Mountain in 1988, showing his search for the truth regarding history, family, and personal identity. Both their works show animation’s possibility of interacting with other visual mediums and engaging with questions like human-animal relations, history, and memory. 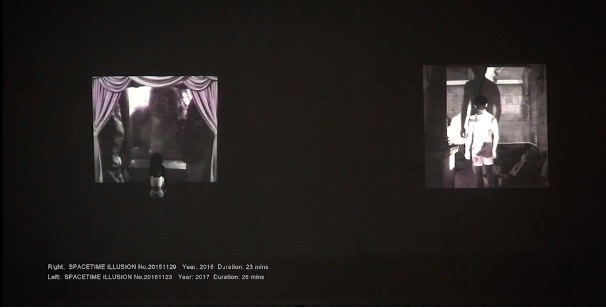 Finally, I cannot express how grateful I am that the conference provided a platform for graduate students to share their projects and gain recognition as scholars. For myself, after I presented, I deeply benefited from the audience’s valuable suggestions and comments during the Q&A section. The conference indeed boosted my confidence as a scholar as well, and I am truly proud to have won the “Best Student Paper Award” and get affirmation that others see the value of my work. I cherished the comments provided by the award committee members, who read many excellent papers. Of course, it was also a pleasure to meet colleagues from across the world, learn their studies and experience, and devise ways to collaborate for projects in the future.

All in all, I cannot report all the excellent talks and discussions and could only recount some highlights of the conference from my perspective. Due to the COVID-19 pandemic, I had assumed that conferences, like other academic activities, would be postponed or canceled. As such, I am glad that the conference was converted into a webinar as a semester-long seminar. With this format and the in-depth discussions, the conference certainly provided me with a fulfilling and stimulating intellectual experience.

Shasha Liu is a PhD candidate in the Department of East Asian Studies, University of Toronto. Her research attends to the mediation of Dunhuang in the 20th century, focusing on four visual media: photography, painting, animation, and film. She is currently writing her dissertation, “Mediating Dunhuang with Images in 1940s-1980s.” Her article, “Zooming in on the Animated Background: Mediated Dunhuang Murals with Design in The Conceited General,” has been published in the Journal of Chinese Cinemas. She was the recipient of the “Best Student Paper Award” at the Inaugural Conference of the Association for Chinese Animation Studies (2021).