Armed with a Type-38 rifle to protect herself from bandits, 16-year-old camerawoman Duan Xiaoxuan ventured into the countryside outside of Changchun with half a dozen fellow animators to complete research and preproduction for Thank You, Kitty (1950). Duan had already worked at the Northeast Film Studio for two years at that point, and was also in the midst of preparing for the studio’s impending move to Shanghai. She recalls the katong division overcoming severe material limitations during those years, including having to borrow scraps of leftover filmstock from the sound department: “sometimes,” Duan writes, “we’d get halfway through only to find out that the film had already been exposed” (30). Even after she and her teenage peers relocated to Shanghai to become founding members of the Shanghai Animation Film Studio (hereafter, SAFS), they faced repeated obstacles born from film’s materiality, such as a missing sequence from the ink-painting short Little Tadpoles Look for Mama (1960) after a festival screening in Czechoslovakia: “the part with the goldfish was missing. It had been stolen, cut right out of the film, which shows how influential the film was internationally” (42). But what Duan did manage to shoot during the Socialist era (1949-76) – “from color puppet animation to papercutting animation, ink-painting animation to three-dimensional animation” (39) – could not be pilfered by any manner of bandit, and continues to enrich the history of Chinese animated media.

Duan’s riveting reflections on her career, which now spans eight decades, constitute one of the standout contributions to Chinese Animation and Socialism: From Animators’ Perspectives (2021), a collection of seventeen chapters edited by Daisy Yan Du. Divided between seven thematic sections, the essays are mostly expanded and revised versions of remarks delivered at “Chinese Animation and (Post) Socialism: From Animators’ Perspectives,” an April 2017 conference hosted by Du at Hong Kong University of Science and Technology (HKUST). Free recordings (with Chinese- and English-language subtitles) of the conference have been made available online for cross-reference; a few of the chapters are new offerings from those unable to attend the event, or have been stitched together from interview transcripts by Du and Song Han. 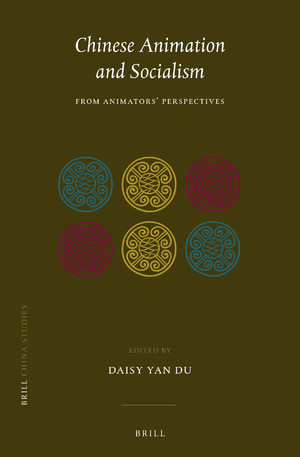 In her introduction to the volume, Du outlines the collection’s approach to periodization, elaborates upon scholarly contestations over what constitutes China’s (post-)socialist era(s), and explains the book’s aim as a corrective measure for an under-investigated – or, in English-language scholarship, a downright “demonized” (3) – historical period. Further, Du writes of the central role Duan performed in gathering such a diverse array of voices from the SAFS for the conference and subsequent publication, including music composer Jin Fuzai (Chapter 11), voice actress Ding Jianhua (Chapter 12), screenwriter Ling Shu (Chapter 13), several former presidents of the SAFS (Chapters 3, 9, 10), and close friends or descendants of those who have passed away (Chapters 1, 14, 15). Director Lin Wenxiao’s opening disclaimer that her “chapter is less an essay and more casual thought” (63) could be said of several other chapters, many of which are written in an autobiographical mode by septua- and octogenarians forthright about their shared belief that “the tradition that we passed on at that time is a precious tradition and that our generation’s legacy should endure” (128). What results is a volume that succeeds in preserving first-hand accounts of production stories and techniques for future generations of scholars to comb through, albeit in a form that occasionally verges upon the hyperbolic and thus must be read and cited as one valuable source among others. Though infrequent, a few baseless claims sprinkled throughout the collection (i.e., “animation did not originate in China; it begins with Disney” [158], or the assertion that Chen Bo’er came to direct The Dream to Be an Emperor [1947] “because she was a woman and thus understood children better” [235]) are likely to cause readers to bristle, but astute students will know how to sift gems from sand. Context is key here, as the collection contains not research papers written by scholars but rather the reflections of senior practitioners toward the end of their careers; it excels in its endeavor to capture a range of memories and perspectives from industry insiders, including those hazy or contentious.

While Du and Duan did much of the heavy lifting to bring the conference and collection to fruition, special attention must be paid to the herculean efforts displayed by the publication’s team of translators, many of whom tackled three or four chapters each: Eva Chang, Shaopeng Chen, Yan Chen, Isabel Galwey, Yixing Li, Sean Macdonald, and Nick Stember. The pairing of their field-specific expertise and top-notch linguistic abilities results in accurate, lucid, and finely edited translations, even in the cases of those essays replete with tricky proper nouns, poetic allusions, and/or industry jargon. Consistent standardization of film titles and certain technical terminology, such as A Da’s practice of “paste paintings” (238), should solidify the text’s position as a reference book for Chinese animation studies, even if some scholars might take issue with those titles and terms which stray significantly from prior convention. Macdonald’s meticulous footnoting of one of the collection’s lengthiest and most theoretical chapters (“Synesthesia of Music and Image”) greatly improves the readability of the author’s prose, which assumes familiarity with Chinese musical traditions: only with this explanatory scaffolding could the reader hope to follow Jin’s points about the disparate pitches and tones of the banhu, zhuihu, and guanzi (159-61) used in the scoring of Three Monks (1980). Considering that the enduring under-representation of Chinese texts in English-language animation studies is due in part to linguistically- and culturally-specific barriers, the translators have made an extremely valuable contribution to the field. That a Chinese-language version of this publication “will soon be published in mainland China” (xi) is icing on the cake.

In addition to serving as a vital resource for scholars of animation, instructors teaching more broadly in film, media, or cultural studies will find many of these chapters well-suited for use in undergraduate or graduate classroom settings. Lin’s pragmatic “Dribs and Drabs” should be of interest to the production-oriented student, thanks to her attentiveness to the function of postproduction regrets and the value of the structured post-mortem (69-71). Jin’s rigid yet enlightening theory of the “emotional,” “cultural,” and “structural” significances of music in cel animation (150-52), combined with his arguments about the need to prerecord some scenes of Nezha Conquers the Dragon King (1979) while scoring others in post in order to play with the degree to which “silence triumphs over sound” (157), is certain to spark debate over medium-specific conceptualizations of animation and its potential soundscapes. Reading unconventional pairings of texts against one another makes it easy to tease out their shared tensions, such as Ono’s (255-56) and Ding’s (167-76) nostalgia for collaborative, spontaneous, and oftentimes chaotic artistic methods necessitated by (the shortcomings of) sound and image recording technologies in the 1980s. Students also stand to benefit from the collection’s treatment of a wide array of animated media. While considerable space is devoted to canonical works such as The Conceited General (1956) and Uproar in Heaven (1961-64), contributors document and analyze lesser-known international co-productions (Chapters 10, 15), puppet and papercutting methods (Chapters 1, 6), unfinished or lost projects (236), scientific films (121), and commissioned and subcontracted jobs (140).

In the epilogue, Du offers a succinct, compelling argument about the ways in which “a socialist legacy will always haunt Chinese animation in the digital age” (259), a case for thematic and aesthetic continuity drawn from Du’s conclusion that the field must remain cognizant of the “lack of any abrupt rupture between the socialist-analog and the post-socialist digital eras” (266) as it now pivots to the study of China’s swelling number of CGI blockbusters “such as Monkey King: Hero Is Back (2015), Big Fish & Begonia (2016), White Snake: The Originals (2018), Nezha (2019), and Jiang Ziya (2020)” (259). Chinese Animation and Socialism, in turn, is haunted at times by the spectres of cultural essentialism and conceptual overgeneralization, due to its repeated equating of the SAFS with Chinese animation writ large (excluding, for instance, Socialist-era educational media), its notion of a “National Style” that ignores the sheer stylistic diversity of the SAFS (esp. Chapter 5), and its recurring attempts to enshrine Socialist-era productions as the “golden age” (4) or even “the peak of […] Chinese animation in general” (7). Such claims that “whatever comes out of China is China’s” (158) are certain to be problematized in future publications, and will exhibit ever-diminishing critical function as the field populates with studies challenging linear or singular conceptualizations of “Chinese animation” and its potential histories and theories. But to these issues, too, does Du offer a solution. As proofs for this collection were being returned to press, Du and her colleagues at HKUST were gearing up to host the inaugural conference of the Association for Chinese Animation Studies (258-259). That colossal online event, which stretched across three months in 2021 and featured seventy-five speakers across nineteen panels, now serves as the impetus for the next collection edited by Du, along with John Crespi and Yiman Wang. By addressing the methods and concepts that underwrite Chinese Animation and Socialism, that collection will likely serve as a companion text to this one, as Chinese Animation and Socialism emphasizes first-hand testimonies by senior practitioners, whereas that forthcoming publication will foreground scholarly arguments by university-trained researchers, with each intended to be read in light of their differing aims and vocabularies.

Binding together the aforementioned collections is Du’s steadfast commitment to the development of Chinese animation studies. Of her experience writing the dissertation that would become Animated Encounters: Transnational Movements of Chinese Animation, 1940s–1970s (University of Hawai’i Press, 2019), Du writes, “Sometimes in my lonely struggles, I could not help questioning myself for taking up such a marginalized topic, but I always assured myself that marginality can be a blessing because uncharted territory can also mean originality” (257). Indeed, originality characterizes this volume’s approach to uncharted territory, with its adept centering of practitioner voices, its attention to Sino-Japanese historical connections, and its remarkable section on sound studies. Animation scholars will note that these are often weak points of the field’s burgeoning crop of readers and handbooks, and thus Chinese Animation and Socialism can be seen as an exceptional outlier within the genre. In light of the dozens of creatives credited in the Table of Contents and Acknowledgements, and the numerous dialogues and studies to be germinated by this volume, I hope that Du no longer feels lonely in her struggles, and that she is able to take a moment of pause to celebrate the decoupling of “Chinese animation” from “marginality” that has occurred as a result of her scholarship, leadership, and flourishing research network.

Jason Cody Douglass is a Ph.D. Candidate in Yale’s combined program in Film and Media Studies and East Asian Languages and Literatures, as well as the graduate certificate program in Women’s, Gender, and Sexuality Studies. His dissertation brings questions of gender, race, class, and spectatorship to bear on the history of midcentury Japanese animation. His publications can be found in Film Quarterly, Animation Studies Online Journal, Women Film Pioneers Project, Transcommunication, Animation Studies 2.0, and the edited collection Animation and Advertising (eds. K. M. Thompson and M. Cook, Palgrave Macmillan 2019). He is currently a Visiting Research Fellow at Waseda’s Graduate School of International Culture and Communication.